Mayhem’s Attila Csihar: “I remember when I was a kid going to see ‘old’ bands – now that’s us!” 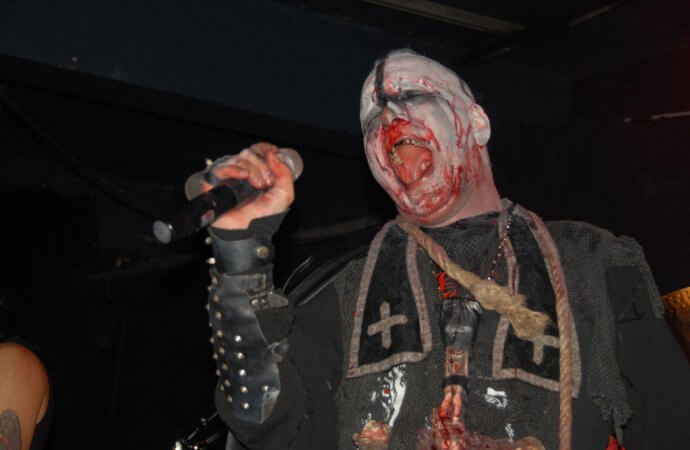 Norwegian legends Mayhem are heading down under later this month... Who better to tell us about the tour than frontman Attila Csihar?

As so often happens when dealing with the global telephonic system, things are going wrong at precisely the wrong time. Pre-recorded women are barking at me in foreign tongues (presumably Norwegian), the allocated time for my chat with Mayhem vocalist Attila Csihar is gurgling down the plughole before my very eyes, and there’s a twat outside with a large lawnmower doing his first post-Christmas grass cut with far too much gusto than can be healthy for a man of his age. Finally, after nearly fifteen minutes trying to get through, the Gods of such things deign to make the connection. We have black metal ignition!

I’m trying to talk to Mr Csihar because, as you’re doubtless aware, Norwegian extreme metal gargantua Mayhem are heading down under later this month as part of their seemingly endless campaign to play one of their classic albums, De Mysteriis Dom Sathanas in every corner of the Globe. Is an admirable ambition no? and one that we here at Sentinel Daily are only too keen to support. Even if that support does come from a severely truncated chat on the ol’ jellybone…

Next May will see the twenty fourth anniversary of the release of De Mysteriis Dom Sathanas – while you were recording your vocals for the record did it ever occur to you that you might, nearly a quarter of a century later, be preparing to play the album in full in Australia? “That’s a really good question! Not really. That would have sounded really surreal to me. It’s amazing actually! But it’s fucking great. In those days I’d never had thought about it”.

The album has aged really well, hasn’t it? Why is that? What would you attribute to it sounding as fresh now as it did when it came out? “I was really happy to be part of it. Something happened on that record… when I first heard from Mayhem I didn’t know the songs… I had my own band, Tormentor, that was similar… but then I heard these new songs and it was like ‘oh shit, I’ve never heard stuff like this before’. It sounded terrific to me. Everything was new – the structure, the instrumentation, the guitar picking, the drumming. The music sounded like slow motion but at the same time had really fast riffs and drum parts. It was very special. We knew it was going to be a strong album- there were already a lot of expectations, actually – but nobody could foresee what would happen. And I think also what happened with the band in those years really contributed to it and that somehow comes through. It’s there”.

You’ve released a lot of live material over the years. Do you think that Mayhem comes over best in a live setting? “Well, there have been a lot of live releases but not too many live albums! When we first played this album in It’s entirety live, two years ago, that was released. That’s the first live album with me on it and I’ve been in the band for more than ten years now. There are so many bootlegs of live stuff out there! I remember signing sixteen different versions of the same album! I couldn’t believe it! There are some crazy collector fans with amazing collections. The bootlegs aren’t cool. I don’t know if the situation is any worse today but they keep cropping up everywhere. So it’s not so many official live releases. Even Live in Leipzig was a kind of bootleg when it was released, and then it became kind of like one of our live albums. But this band is kind of special in this way, all this shit happens to us!”

Do you still enjoy getting out and touring? Or is it getting harder as you get older? “No, I love it. But now we have so many intense tours. The last tour we were in the US, and before that Europe, and it’s funny because my other band Sunn O))) had dates booked… so they ran the two tours together and it was like I couldn’t get home! I was like fuck! But the worst is when you are home and you think ‘fuck, I just want to stay here!’ But once I’m there, travelling and I see the guys, then it’s OK again. It’s always hard but everyone has ways of coping. Some like to go for a walk, some like to read a book. Or party like crazy! It’s fun, I love those guys and their craziness. It’s like a family, a fucked up family! It’s good. We’re not getting any younger it’s true, but we have a great crew and better organisation than we used to have, and all in all it’s good to play, you know?”

You’ve been all over the world with this tour, as you say for two years now. Are you noticing differences in the crowds or is globalisation and the fact that we all see the same stuff on the net turning metalheads into an amorphous worldwide mass? “There are still differences. Crowds in South America are always fucking crazy! I don’t know if the net is responsible… globalisation means we can play everywhere and maybe it’s the fact that this is a special album, that means the fans all react to it well… what I did want to say was how young the audiences are which is cool… the band is thirty years old! It’s like all the generations are coming to our shows! Fathers with kids, and soon the grandkids! It feels like when I was a kid going to see ‘old bands’ like Deep Purple. Now that’s suddenly us!”

Attila Csihar and Mayhem tour Australia from January 16th. If by some strange twist of fate you still need tickets, go HERE