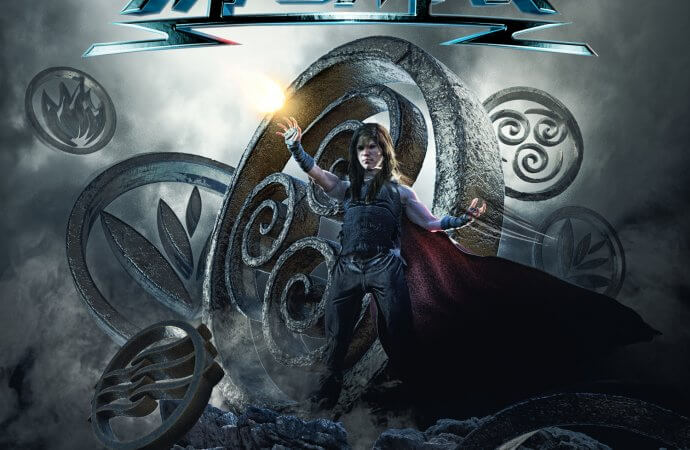 Doing what they do best...

Despite treading broadly the same ground as label mate Axel Rudi Pell, German hard rock stalwarts Mad Max manage to sound as fresh as they ever have for large parts of new album Stormchild Rising. Whilst Pell’s music often seems earthbound and moribund, Mad Max attack similar subject matter with such verve and enthusiasm that they seem to come from another planet entirely rather than the same part of Western Europe.

Album opener Hurricaned isn’t the best thing they’ve ever come up with, but it does set expectations for what’s to come. A fast-paced rocker (apparently written as a tribute to Rainbow, which gives an excuse to get the ubiquitous Ronnie Romero in to do a bit of guest vocalising), it quickly gives way to the staccato riffage of Talk To The Moon. Staccato riffage? lunar communication? you get the picture, surely…

Eyes of Love is a jaunty if standard piece of radio rock, Mad Max style; Michael Voss gives an assured performance vocally and his guitar interplay with Jürgen Breforth is punchy and on point.

So far, so business as usual; However the quality is ramped up notably on next track Ladies and Gentleman, an epic sounding piece of stadium metal not a million miles away from the sort of thing Pretty Maids are serving up at the moment. Moving from Dioesque picking (if you’re as pedantic as me you’ll get heavy whiffs of Don’t Talk To Strangers in the song’s intro) to a lighter-wave inducing chorus, this is the first track on the album that really reminds you just what a talented songwriter Michael Voss is.

Mindhunter and Rain Rain keep things humming along nicely, but it’s the next brace of tracks that will go the longest way to cementing Stormchild Rising in the affections of long term fans and newbies alike. First we have Gemini, a superb piece of melodic hard rock that screams CLASSIC! right from it’s opening Scorpionsesque guitar salvos onwards; it’s a stomping, cocksure piece of pure nostalgia, but with the feelgood factor of the familiar comes the euphoric realisation that Mad Max are able to pull this off with a tip both to the past and the present. Gemini never sounds dated – but it does sound like a band at the top of it’s game doing absolutely what it does best. And that’s a joy to listen to. Similarly next track, Kingdom Fall, adds a grittier Whitesnake/Krokus feel to proceedings, especially at the beginning of the song, whilst surrendering nothing in the memorability stakes. Both tracks are shining examples of melodic hard rock Mad Max style, and both stand up with any of this band’s best work from across the decades.

A couple more guest stars pop on the next two tracks, with Stryper man Oz Fox delivering a nice solo on The Blues Ain’t No Stranger, before the band team up with one of this reviewer’s all time fave singers, Paul Shortino, for a blazing take on the old Rough Cutt chestnut Take Her… I didn’t have to tell you Shortino was singer for Rough Cutt, did I? No, I thought not…

Last track Busted closes things out in nicely metallic style, built on some superb Breforth riffage and a nice touch of talkbox guitar from Voss. It’s a nice bit of showboating, but who can blame a band when they’ve put together such an entertaining, exciting album this deep into it’s career? Not me, and I don’t think you will either after having a listen to this peach of a record.