Love And War’s John Adams: “We strive to be a little different”… 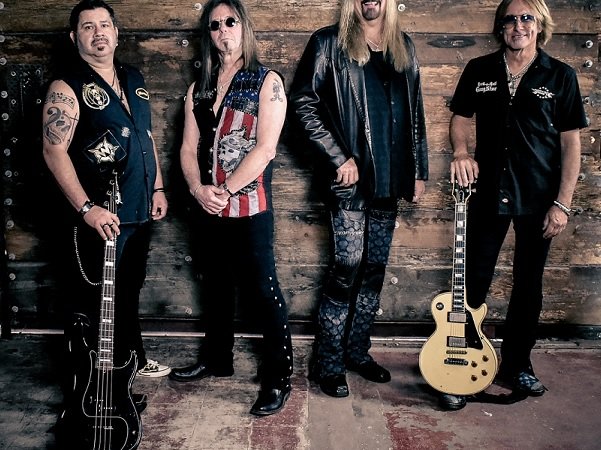 Scott Adams talks to guitarist John Adams of Houston's Love And War about the band's excellent new album, Edge of the World...

Welcome to Sentinel Daily and congratulations on the new record! You’ve been together as a band for a while now, but Edge of the World is only the second album from Love And War. How hard is it in the modern musical environment to hold a band together for the amount of time you have? “The thread that holds it all together for us is the sheer love of the music. It is tough at times, the four of us have been together for ten years, we are like brothers, we all have so much in common, mainly to play the music we love, and we get along like family, that helps!”

You state influences like UFO and MSG but the record doesn’t sound dated – you’ve managed to incorporate the sounds you love into a great modern day sound. How important is it to you to not just be a ‘retro metal’ band? “It means everything! Yes, we are a product of our influences, but wow, being a teen in the late seventies with all that great classic rock, and then the early to mid eighties playing in the hub of all those great bands and to experience the debauchery first hand? PRICELESS DUDE!(laughs)… we strive to be a little different yet maintain the character of our influences!”

Well, you’ve striven well! What will the touring possibilities be for this record? “We will see what presents itself, if a promoter reaches out with some dates we will look into making it happen, times have changed, you can’t get out and tour if no one knows who you are; you won’t attract a crowd, but we are working on getting our music out there, we need distribution at this point, so if the demand arises, we would love to support our new music with some dates!”

Tell us a little of the writing and recording of each of the songs on the record… Track one is We All Fall Down. “I wrote this one, music and lyrics, the intro was actually a warm up exercise, after playing it over and over, thought it would be a cool intro, the rest fell into place, the main riff is George Lynch influenced, I love him! I came up with the chorus first, then wrote the verses about high and mighty attitudes that eventually come crashing down -Karma I guess!”

Yes. Now you mention it I can hear Lynch all over that riff! Start Believing is next. “Just a riff in drop D that sounded cool; Jeff wrote lyrics about being down and out, but not giving up and believing in yourself!”

And Mercenary Man? “I wrote both the words and music. The guitar riff is very seventies – chunky, there are some (Paul Chapman era)  UFO similarities, for me anyway! The lyrics are about a hired gun, an ex Mercenary needed to take care of some business!”

Next up is Edge of the World. “The intro had been floating around for a bit, a staccato exercise; the song is a beast! I wrote the riffs of the song pretty quick, it just came flooding out one day… I gave the music to Jeff – I had already written the chorus; my inspiration was about finding yourself, waiting and yet not knowing what the future holds – Jeff had a hard time coming up with verses at first, but it’s pretty self explanatory”.

The next track is Psycho Ride. “Me and Jeff wrote this song in fifteen minutes! He hummed a riff in his head, I took it and ran with it, his lyrics are inspired from by ex-girlfriend!” (laughs)

Final Destination is track six. “I wrote the music start to finish, Jeff wrote lyrics about a basically ‘Don’t Fuck with me or I will kick your ass’, and it will be your Final Destination kinda thing! SO ANGRY (laughs)…

I’m pretty sure it’s that attitude that makes it my fave track on the record! What about Strange Kind of Medicine? “I wrote the music for another band I have, a Southern Rock band, thus the dobro and slide intro. But the riff came out so heavy sounding I used it for Love and War. I came up with the chorus, Jeff’s lyrics are mostly sayings that he heard from his Dad growing up, ‘Believe in God and be a good Man’ – stuff his Dad always told him. You can hear it in the song”.

And Sidewards Flight? “The music was a riff I had and ran with it, Jeff wrote the lyrics – it’s a metaphor for being out of control in life, (No, not us (more laughter)”

Seems straightforward enough! Back to those influences now. If you had the chance to form a band with Michael Schenker, Eddie Van Halen or Matthias Jabs, who would you pick, and why? “Michael Schenker of course! He is the reason i’m playing guitar today! My brother played the UFO Force It record when I was twelve, I was learning how to play guitar two weeks later, it was that profound!”

And who else would fill the spots in this imaginary all-star combo? “Tommy Aldridge on Drums, Peter Baltes on Bass, and a singer who can entertain like David Lee Roth, but can sing like Ronnie Dio and David Coverdale, he exists only in fantasy apparently!”

Haha – I thought that man was me when I was singing in a band but you’re probably right! Talking of singers, Jeff Vandenberghe -as a songwriter, does it make things easier for you when you know your vocalist can handle anything you throw at him? “Yes, me and Jeff have been playing together for a very long time, but like any singer he has his limitations, I know them and try to write around them, mostly; he writes what he knows he can handle as well! He has a great range and is very flexible!”

Anything else you’d like the readers of Sentinel Daily to know about Love and War? “This is the music I so dearly love, and most of you as well – lets keep it alive and kicking! I feel sometimes like we are a dying breed of music lovers, our music isn’t mainstream anymore, but it lives in our hearts and souls. Support all the bands that are still giving an effort, the days of big record deals and packing venues are behind us, so please make an effort to support! LONG LIVE ROCK!”

Well said! Thanks for your time!

Read Hideous Destructor’s review of Edge of the World HERE