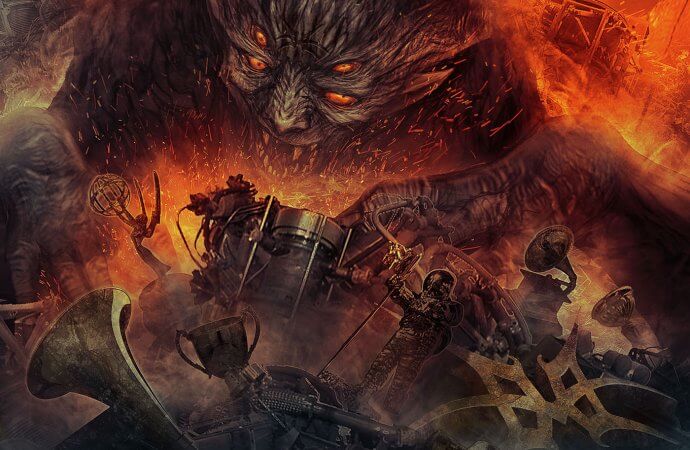 Stunning and long-awaited return to duty from these Australian veterans...

Is it really six years since Lord released a full-length album? You’d not realise that fact were true had you been living in a cryogenic pod all the while and were handed a copy of Fallen Idols and 2013’s Digital Lies, such is the continuity of style and approach to be found over the two discs. But there is definitely a progression in evidence here, notwithstanding the evidently seamless transition between then and now in the world of Lord Tim and company.

Fallen Idols is leaner, tighter and more vicious-sounding overall than it’s predecessor; the ‘epic’ tracks don’t ramble on past the eight and a half minute mark, for a start, meaning that even when the band stretches out a real and very vital sense of urgency is retained about the material that makes for an utterly compelling listening experience. You’ll already be familiar with first single United (Welcome Back), doubtless (if you haven’t you can watch the clip below-Ed.), but whilst it’s broadly representative of the audio delights that await you on purchase of the new album, it’s representative in the same way the tip of an iceberg suggests what might be going on a bit further down in the depths of the monolith…

So, of course, there’s riffage. Bloody tons of the stuff, marshalled by LT and his partner in shred Mark Furtner to maximum effect wherever they get the chance. Which is often. But, and it’s a crucial ‘but’ within the context of an album that might often seem as if it’s about to tumble off the path and into that patch of undergrowth over there marked on the maps as ‘gratuitous widdle’, this is a band that’s never scared to leaven the tectonics with huge, ocean-sized swathes of tunefulness. The best example of this tactic is the exquisite Chaos Raining, which is set to enter your chart of fave Lord songs at a very high position at first contact purely because of this supremely engineered marriage of muscle and melody.

Elsewhere Counting Down The Hours is a more prosaic example of this concept – you might recognise it as a power ballad – but again this is an album that’s been put together by real craftsmen, and, even if you wanted the heads down thrash of preceding track The Edge of The World to last forever, it can’t. We’re all a bit older than we were six years ago, after all, and so this little bit of respite is actually very welcome, not only in terms of our necks but also in the way that the album is afforded a little dynamic contrast by the track. But don’t start twitching – there’s still a couple of eminently ‘air guitarable’ solos to get involved with if you’re still feeling hyped up by the metal assault that’s gone before.

Kill Or Be Killed is perhaps the most ‘classic’ sounding track here, marrying the best Euro power and Maidenesque galloping and who-ohhing to LT’s immediately recognisable vocals, and for that reason it’s probably the track that die-hards are going to zero in on, but in all honestly where Digital Lies at times faltered or seemed content to tread water, Fallen Idols forges ahead on a tide of inspired musicianship and sharp metal songwriting. There are no weak points on this record. It might take you two or three listens to get with some of the finer points of the FI programme, but once you do you won’t be looking back. Fine work all round.

Fallen Idols is set for release through Dominus Records on August 1st.