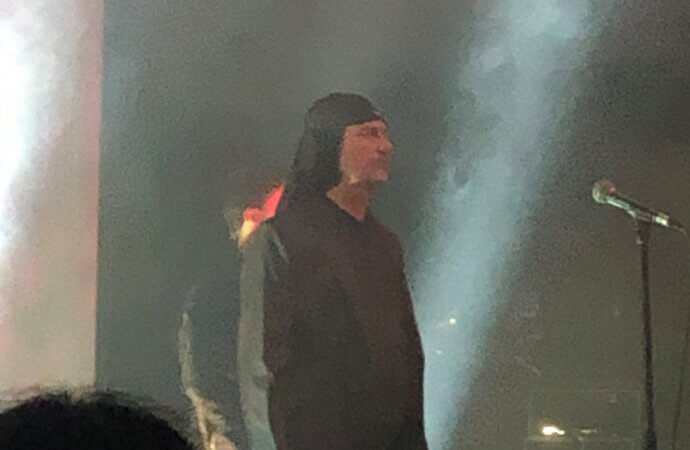 There are more questions than answers...

Where to for a band that’s rapidly being overtaken by the tide of modern events? Ever since their inception in Communist Yugoslavia in 1980 the band Laibach has made a living out of wilful obscurantism – are they fascists? are they communists? – and their playful mix of the agent provocateurism of totalitarian iconography with surprisingly catchy martial industrial soundscapes gave the collective thirty years of clear water in which to play with the sensibilities of the Western Media.

Now, in 2020, we live in an age where, in surveys the world over, over half the population of people under twenty five profess to have have a favourable view of Socialism. The tide is turning. In a world where people don’t mind a bit of brutal authoritarianism, acts like Laibach run the risk of quickly becoming today’s wearisome cabaret act, and yesterday’s thrusting avant garde.

So tonight’s show at a not-overly busy Metro might give us a few pointers to where vocalist Milan Fras and company see themselves heading in what promises to be one of the most politically tumultuous decades of human history. The first half of the evening sees them cement their position in the first rank of kitsch Eurotrash providores, delivering the whole of the soundtrack to Julie Andrews vehicle The Sound of Music as only they can. It’s a truism often repeated that a good song can withstand any sort of interpretation, but that glib assertion is really borne out by the band’s readings of My Favourite Things and especially the poignant So Long, Farewell.

Do-Re-Mi is another favourite with those who have turned out, some of whom are dressed as if they haven’t had a night out on the town since Benito Mussolini was deposed in 1944, and you have to say that this first half of the evening is, from start to finish, an unmitigated success.

The second half – the half where Laibach are asked to fall back largely on their own musical smarts, doesn’t fare quite so well. For large parts of this section Fras and his band of musicians churn away manfully, sounding at times like Massive Attack in their more lively moments, at others just like any other Euro Industrial act you’d care to mention. Images flash behind them just as you’d expect – Nazi UFOs, Soviet Stars, sunwheels and Swastikas, but it doesn’t inflame or excite with quite the delicious intensity of the Laibach of twenty years ago…

That said, I have to say that this is one of the most enjoyable sets I’ve seen Laibach deliver in my thirty-odd year acquaintance with the band, and when they end with a devastating encore one-two of Sympathy For The Devil and Life is Life (both, of course, other people’s songs), all is forgiven at least for a quarter of an hour of stentorian-voiced nirvana.

But the question remains; which arm of the crossroads do Laibach take? Semi-comedic live Karaoke vehicle for an audience of post-modern ironists or genuinely dangerous dadaist musical terrorists? I know which one I’d prefer but on the evidence of tonight’s performance Laibach themselves would appear to still be wracked with indecision…