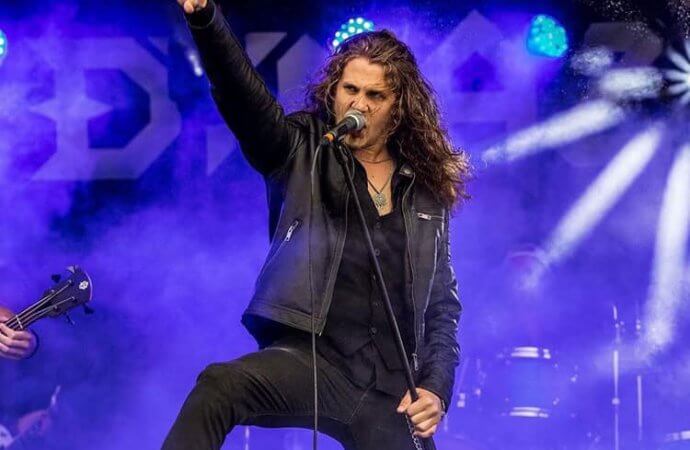 Dynazty vocalist Nils Molin takes Scott Adams for a trip around his own personal COVID lockdown...

Hey Mr. Molin! Thanks for joining us for another round of Kwarantine Kutz! As the world writhes in the grip of COVID-19, there’s a better-by-the-day chance of the general population being put into total lockdown. Which five classic albums are you planning on giving a good listen to when the unthinkable happens, and why? “There’s this one album you put your logo on – called British Steel – by Judas Priest. I’ll listen to that. Along with Rainbow’s Long Live Rock n’ Roll. Pink Floyd’s The Wall is good for long hours of quarantine. As is Dream Theater’s Images And Words. Then I’ll finish it off with a Dio album. I’ll go for Last in Line“.

That’s a selection I can get behind! You’ll have a lot of time on your hands even after repeated spins of those old faves – any new bands you’ve heard about that you’ll be able to lend some ears to? Who is on the up-and-up in your opinion? “There are many of course. I’m a big fan of Tunisian band Myrath for example. A wholly unique sound, great productions and fantastic songs. Then I’ll catch up on stuff being released the last year or so. The latest Opeth album for example”.

Myrath! A favourite around the Sentinel Daily office. And we pronounced that Opeth album their best in years too! Happy listening! How will you otherwise handle the comparative solitude? Do you write music on your own well? Or do you need other musos around to catch the spark? “I do write on my own. This will be a good time for it, even though we’re just releasing a new album. Creativity does not know rest(laughs)”.

It certainly doesn’t! And congrats on the album, too – it’s a bit of a ripper! Away from music, what books, podcasts or TV do you recommend to while away a few quarantined days? “I just saw a German Netflix series called Dark. It sort of blew my mind. Extremely intricate and unpredictable. Then I just watched a documentary called Push. I’d recommend that to anybody who wants to be truly frightened by the monster that the global housing market has grown into”.

There is a lot of comment on social media about the damage being done to our industry by the virus and its attendant countermeasures – how do you see ways to fight this situation working? What, for instance, do you think of playing shows for the internet and hoping fans throw a few coins into the hat via Paypal or Gofundme, etc? “For sure, there is heavy damage being done. When whole countries have to go into full lockdown it’s of course going to have catastrophic consequences for the economies. The live market has naturally been devastated by it. Everybody with tours scheduled for the spring has to cancel it all. Us included. I’m not entirely sure about this concert live-stream thing. Sure, it’s a great thing for fans who are unable to see bands at the moment, but chances are that with this you are releasing a beast that potentially could threaten to over-run the real live market. If that would happen there wouldn’t be much of a music industry left”.

An interesting and sobering take. And one to take note of. When it all dies down, what plans loom on the horizon for you? “Lots and lots of touring. Though at this stage nobody can know exactly when that will be. Hopefully the European festival season will mostly be intact”.

Yes. Hopefully! Will rock n’roll be the same after the scare recedes – are there any lessons for the music industry to take from what’s happened so far and implement for a better tomorrow? “In this case, the industry has done no wrongs. It’s just very unfortunate circumstances. I guess the lesson learnt is that you can never take anything for granted. And long term touring plans can go right out the window because of a Chinese food market(laughs)”.

True – so very true! Anything else you’d like to say to our readers at this difficult time? “Wash your hands, stay safe, and take this time to properly listen to our new album The Dark Delight when it drops on April 3rd!”

As Nils said, Dynazty’s new album, The Dark Delight, is out on April 3rd through AFM Records. Read Gavin Strickmann‘s review of the album HERE!