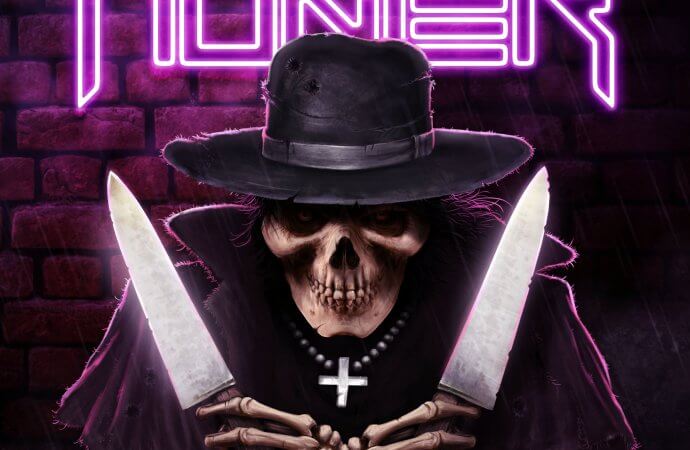 Their uncomplicated, riffcentric metal won’t stretch the listener, and neither will their lyrical themes, but for the duration of this self-titled Album (although at less than twenty eight minutes in duration it’s barely more than an EP), people who still own a cutoff denim battle jacket as a piece of wearing apparel as opposed to a museum piece brought out for eye-rolling family hilarity at family gatherings will find plenty to enjoy over the course of the seven songs on offer.

The production on Hunter is nothing better than adequate – again, the Mausoleum comparison strings to mind – but at least it’s clean enough to pick up some nice touches on the bass from Jeroen Wauters, who honks away in fine style, particularly on the galloping No Man’s Land. Vocalist David Walgrave finds himself front and centre of the mix throughout, and acquits himself well, particularly on the heavier material where his air raid siren bellow has a hint of Bobby ‘Blitz’ Elsworth to it. And of course the band have a fully-functioning guitar-heroes-in-waiting pairing in the shape of Joost Vlasschaert and Thomas Abeel, both of whom do a decent days work both as riff purveyors and soloists.

Then Comes The Night curiously borrows the main riff from The Ruts‘ Britpunk call to arms Babylon’s Burning, but the whole thing comes together best on the quasi-epic The Knight of the Black Rose, which packs enough interest into it’s five and a half minute duration to keep even the most demanding headbanger happy and features a drum performance from Dries Deturk that could only rightly be termed ‘McBrainesque’. Which of course is a complement around these parts… Closing track Glorious also carries some uncomplicated heft which is mighty appealing.

Hunter is out on April 27th.