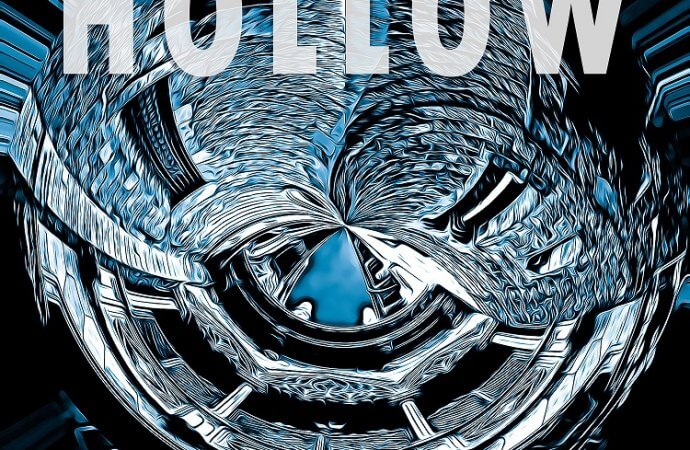 Swede Andreas Stoltz – he is Hollow, playing and singing everything you hear on Between Eternities of Darkness save for a few bits and pieces and all the drums – is one super-talented hombre. I’m not going to look too deeply into the reasons as to why he hasn’t recorded anything under the Hollow banner since the end of the last century, save to say that I’m pretty chuffed that he’s decided to take up these particular cudgels again.

Hollow deal in heavy, at times anthemic prog/power, with focus on a particularly muscular guitar sound that really adds oomph to every song featured here. Opener Travel Far starts things off nicely enough, but it’s second track Fate of the Jester that really gets the pulse moving for the first time. Stoltz has a great voice – Labrie is one name that comes to mind, especially on the less strident material – but for the most part he’s his own man vocally, adopting a lithe, supple vocal technique that can handle anything from heavy to soft and back again with apparent ease.

Fate of the Jester really is top draw stuff, packed with the sort of riffage you’ll not be able to resist air guitaring to, and if next track Down isn’t quite as memorable it does at least feature another dose of headbangable riffage. Pull of the Undertow is next up, less straightforward and perhaps the first track to really warrant the ‘prog’ soubriquet. That said, it’s also got rather a splendid chorus, reminiscent of mid-eighties US power metal like Fifth Angel et al. It’s well-put together, energising to listen to and again comes complete with a crystal clear production that reminds you just how handy Stoltz is as a multi-instrumentalist. The interesting solo section also hints at a direct lineage to some of the best ‘prog’ metal of the late eighties, especially Crimson Glory. Which has to be a good thing!

Shadow World falls down if only because the production isn’t as slick as Stoltz would probably have liked, it’s semi-balladic nature just coming across a little too much on the raw side to be completely comfortable to the listener. It has the capacity to be epic, but comes across as merely a good idea that needs tweaking.

Still, the germ of a good song is there, and Hollow wisely don’t dwell on matters, getting back to the metal in the shape of the tuneful Hidden, whose chiming chords and bright, metallic guitar work prompt thoughts of Queensrÿche in their classic mode before the creepy talk vocals and attempts at funk rock took hold. Stoltz adds the right amount of grandiose on the vocal front, the result being one of the best tracks on the album. Next track Calling adds some grind in the axe department by way of intro before the axes subside to allow Stoltz the room to tell his tale. He’s got a good grasp of dynamics, this lad, and, as the intensity of his vocal builds you just know those guitars are gonna come crashing in – and they do! After all the Yankee stylings employed in the first half of the album, Calling cuts a distinctly European figure, especially in the vocal department, with some nicely over-the-top backing vocals adding to the fun. It’s another solidly appealing piece of metal, and you’ll love the classic metal solo Stoltz throws in mid song.

The Road I’m On is a bit of a riff monster and features some great female vocals (uncredited on my version, I’m afraid), utilising a classic ‘Eastern’ feel that metal fans will recognise immediately; Yes, we’ve heard it before, but here it’s so well delivered that no impact is lost. And again, Stoltz provides a superb guitar solo to perk things up. Penultimate track Death of Her Dream is another slow building mini-saga, packing far more ingenuity of thought into four and a half minutes than many bands can muster in four and a half albums, whilst closer Say Farewell, as it’s name suggests, brings the curtain down in sombre fashion.

Progressive power metal is what it is, we all know that, and consequently Between Eternities of Darkness delivers no surprises over it’s three-quarters-of-an-hour-long journey. But that doesn’t mean you won’t enjoy it – you most certainly will – packed as it is with memorable refrains and uber-muscular rifferama from start to finish. It’s not a classic, but I’ve no reservations about recommending it wholeheartedly. Get involved!

Between Eternities of Darkness is out this Friday (January 25th)