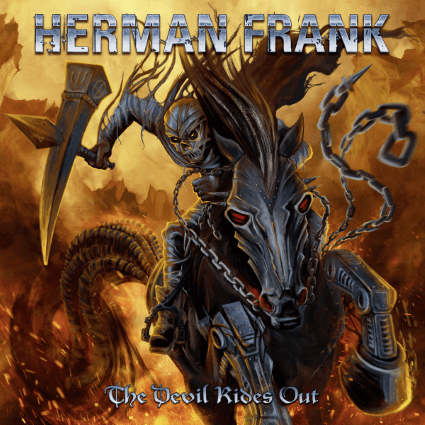 It would be a mistake, of course, to merely label Herman Frank as being ‘ex-Accept’; He recorded more albums with German hard rockers Victory than he did with Solingen’s finest for a start, as well as contributing to the canons of bands such as Sinner and Hazzard and bringing out last year’s collaboration with Destruction bassist Schmier, the underwhelming Panzer project.

He’s a fine guitarist in his own right, and over the course of three solo albums since 2009 (that years Loyal to None, 2012’s Right in the Guts and now The Devil Rides Out) he’s carved a cottage industry-sized niche for himself, defining his role as a purveyor of solid Euro power metal delights.

Veering from all-out heads down mayhem (opening track Running Back could well come to define the term ‘all guns blazing’) through to Whitesnakeish heavy rock (the catchy Can’t Take It sounds like something labelmates and fellow ‘snake worshippers Voodoo Circle might be interested in putting out), Frank’s got all the rocking bases covered with this set, but whilst that’s all well and good – his playing and writing standards are a given, after all – the icing on the cake comes in the versatile and very admirable singing contribution of Masterplan throatsmith Rick Altzi, a man for whom no task vocally is too big. He’s the possessor of a pleasantly gritty voice, at home with material of varying intensity and blessed with enough personality to ensure that even the most prosaic of material here – No Tears in Heaven, for instance, rarely drags itself above the merely mundane – is given a bit of character thanks to his lusty delivery. This form of metal is a saturated market right now, and it makes all the difference for a band to have a singer with a bit of, as we say in the industry, oomph.

Frank is an undoubted riffmeister – the gloriously Iommiesque Ballhog Zone and License to Kill underline that fact – and his ability to add crunch and heaviness to catchy melodies means that the moments when this album dips into tedium are few and far between; and whilst it’s obvious that fans of Accept and Victory will be sniffing around The Devil Rides Out, the appeal of this album should stretch far beyond disciples of those two acts. If you like quality, melodic hard rock or heavy metal, you’ll not go far wrong with Herman.