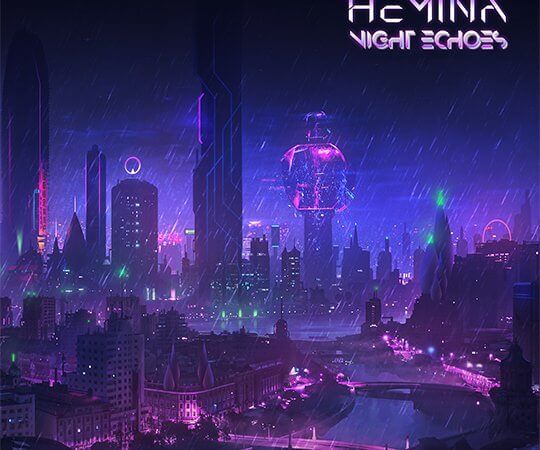 In the three years since Australia’s Hemina released their third album, Venus, a lot of water has flown under the prog metal bridge. So much, in fact, that a bloody huge reservoir of prog now threatens to deluge the country, much of it comprised of cookie-cutter proggists all busy putting their twist on the ever more-saturated genre. So let’s doff our caps, then, to this unsung bunch of chaps (and chapesse), for producing one of the finest Australian prog albums ever in the shape of the utterly monstrous Night Echoes.

I mentioned in my revue of Venus last time out that the band had all the hallmarks of greatness. Here they frank that form prediction exuberantly, taking not just a step ahead of the chasing pack but several laps, thanks to the sumptuous, soulful grooves of this wonderful album.

The best thing about Night Echoes is that it is, for once, a properly progressive record, where progressive means ‘not mired in the same choppy riffs and cod-jazz soloing as everyone else’. The band once again casts it’s net wide, influence-wise, to create something you’ll really not hear anywhere else in this style of music in 2019. That means pop and soul choruses – loads of them – song craft that will always favour memorability over knuckleheaded crunch, and an entirely open attitude to their craft and an utterly refreshing ability to embrace just what’s right for any song in any given moment.

Of course, there are still moments of steel – the double bass/staccato riff/shred juxtaposition of the middle part of opener The Only Way takes care of that – but the placement of these moments often goes to serve the lighter moments, effectively highlighting the band’s ability to morph a song from Dream Theater, through Styx and on to Level 42 within a very short space of time; I’m no expert in these matters but I can spot masters at work, and this opening song is just that. Douglas Skein’s funky, Glenn Hughes-styled vocals are an absolute revelation on this track, but, thankfully, the fun doesn’t stop here…

Second track What’s The Catch? ups the pop quota even more, yet still retains a craggy framework thanks to the guitars of Skein and Mitch Coull; fans of eighties names like It Bites will find much to like here. Similarly the following piece, We Will, which bounces in on a nice bass riff from Jessica Martin, carries a strong AOR presence whilst remaining demonstrably ‘prog’ in outlook. Uplifting keyboards keep things from going too riff-crazy, as do Martin’s backing vocals, but the track still maintains enough heft to keep grim-faced metallians interested alongside the dust-coated, bouffant-sporting millions who are sure to be flocking to the Hemina banner after a couple of listens to this fabulous slice of pop rock.

Finger snaps and massed backing vocals usher in One Short – you may be forgiven for thinking you’d stumbled across a long-lost Hall and Oates bootleg at first hearing – before some rampant fusion guitars set the listeners’ Totometers hurtling into the red. This is pure mid-eighties pomp rock, and it is utterly glorious.

Mercifully the band take a step back from the edge for the opening of Flat, allowing the listener a little bit of respite, but they don’t take long before ramping up the drama again; mid way through the song – heretofore a peaceful and warm slice of bucolic musical reverie – they throw the kitchen sink at the ears again, overloading you with multi layered pompousness before a triumphant diminuendo that enables the song to run out through a restrained closing passage that’s part Rush, part Marillion but totally all class. Everything Unsaid is a short vocal/acoustic bridge that leads in to the albums closing triumvirate of tracks. It’s pleasant, but gives no clues to what lies ahead…

… Which is Hemina at its absolute apogee. Kicking off with Nostalgia, a multi-vocalled, jazz-chorded extravaganza that swoops in and out of moods so fast you’ll need a lithium just to hang on to the band’s coattails, the band literally pull out every stop available to them to end the album on the sort of triple-barrelled bang most bands in this sphere of operations will only ever be able to dream of achieving. In Technicolour is a stop-start tip o’ the hat to the second wave of Brit prog from the early eighties, marshalling thoughts of names like Pallas, Twelfth Night and the inevitable Marillion (again) as it wends it’s way through nine minutes of technoflash troubadourism of the absolute highest order. Seriously, If Sons of Apollo put something out even half as good as this track we’d all be salivating like Pavlov’s Dogs at this year’s Canine Bell Ringing festival; that’s a recommendation I don’t make lightly, by the way… but in thirty five years of listening to music in this style I have never been so totally bowled over by the prowess and execution of an ‘unknown’ band.

Final track Flicker can’t quite live up to this, so relatively speaking the album finishes on a slight low point. But I emphasise the ‘relative’ in that statement. Most bands would sell close family members in order to be able to bow out in such accomplished fashion.

And now, perhaps, as the final notes die away, it’s time to reflect, somewhat more calmly, on what’s just happened, aided maybe by the application of cooling towels to the forehead and with my ‘writer’s hyperbole’ App wrenched from my still-twitching fingers… This truly is a work of splendour and beauty, and I hope in some small part that Sentinel Daily can help to spread the word of Hemina as far and wide as is in our gift. For it surely is a word worth hearing, and this is an album that is definitely deserving of a place in your collection…

Night Echoes will be released on August 9th.