Heavy Pettin: “We just thought do the gig, and we’ll see where it ends”… 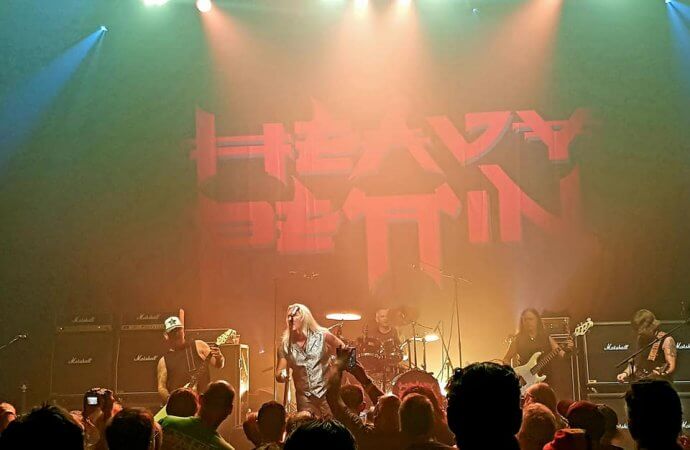 Hi-jinx on the high seas with Hamie and company...

Eleven AM. A pretty normal time for most people, on most days, but when you’re on your first Monsters Of Rock Cruise it’s kind of like a Six AM wakeup call has jolted you awake when there are still a fair few more zeds to catch. Still, we’re all in the same boat, literally, and so your intrepid reporter, alongside vocalist Steve ‘Hamie’ Hayman, and guitarists Gordon Bonnar and Dave Atkins of a newly-resurgent Heavy Pettin have agreed to meet up in the band’s Manager Dutch Michaels’ opulent state room to discuss what’s been going on with the band since they reformed a couple of years back…

What was the motivation for getting the band back together?
Hamie: “I was sitting on the beach talking to my daughter. She was telling me about all these other bands getting back together. She said ‘why don’t you guys get back together’. I wasn’t sure, because we hadn’t talked in a while’”.
Gordon: “It’s difficult, because Hamie lives in America, and we live in Scotland. We were always thinking about it. But it was always difficult to take that first step from a logistics point of view. But Hamie called me in the summer of 2016, really pushing to put something together. So we got everybody together, talked. I was sitting in my garden, and I thought ‘let’s just do a gig. One gig. And let’s do it one year from now’. So I called Hamie, and everybody bought into it. It wasn’t a lot to expect of everyone, and it was far enough away not to worry about! So that and Hamie pushing was how we came to play the Winterstorm Festival in 2017”.
Hamie: “It was cool. I was in New Orleans when he called, and he said ‘are we gonna do it?’ and I said ‘sure (long pause)… awesome’ (laughter)’
Gordon: “And we weren’t going to do anything after that. We just thought do the gig, and we’ll see where it ends”.
Hamie: “And it turned out lovely!”

So how different do you find the ‘music industry’ now to when you packed it in first time around?
Hamie: “It’s all changed. From when we were doing it. You can do so much more without a record label these days. In those days we needed the record labels”.
Gordon: “The biggest thing is the lack of need of record labels. And the power of the internet. A record company is just a bank. They don’t write your songs, they don’t design your logos – they just pay for stuff. And back then it was really expensive to record an album. You needed their money. If you wanted to go out on tour you needed their money. But now you don’t need that money because we’re able to do things fairly cheaply now. And the internet, from a marketing point of view… with a couple of people helping out you can get all that stuff covered. I guess if there’s a problem it’s that everyone is doing the same thing; there’s a whole wash of this stuff that you have to try and cut through. It’s a challenge but that’s healthy”.

Do you find now that bands have to do more to promote records than you perhaps might have done in the past?
Hamie: “Well, I think we have to do more, as individuals, because the record company did all that for you”.
Gordon: “There’s more insight into us personally as well. Before there was still a little bit of ‘mystique’ about being in a band. The music press was really the only way people could get to hear about you. Now people are doing videos of themselves eating their breakfast!”
Hamie: “Now everyone can see us sitting in the bar at midnight on Facebook!” (laughs).

So are you enjoying that Social Media side of being a 2020 band?
Dave: “It’s great. It gets you connected with people. You see people comment straight away. You get instant feedback straight away. Sometimes it’s negative but that’s fine! Before you used to do a show and people would go away and you wouldn’t know whether they’d enjoyed it or not. Now they’ve put a video up before you’ve got offstage! We did a tour last year and that was happening, and you’d sit there and think ‘well, that didn’t sound too bad for a bunch of old guys on a Tuesday night!” (more laughter)

So how have you found this Monsters of Rock Cruise?
Hamie: “It’s crazy!”
Gordon: “It’s blown our minds a little bit. We had never done this sort of thing before. Everything is new. The fact that everybody here is together – you’re all talking to people in the lift, or going to see the same bands as the fans… where else would you be able to do something like that?”
Hamie: “Being so close to the fans… they can just walk up to you and say ‘hi! Love your album!” or ‘you were great on stage last night’ that sort of connection has been really cool”.
Dave: “You don’t actually realise how big it is until you get here. You hear people who’ve done it before speak about it, but until you’ve done it yourself you don’t realise… wow!”
Gordon: “And you can get absolutely rat-arsed drunk, and when you stand up you think it’s just the boat rocking!” (much more laughter)

And no ones driving home! Have you enjoyed seeing other bands on the cruise? Reconnected with any one from the old days?
Hamie: “Yes, it’s been cool. Although all the bands I planned on seeing yesterday I actually missed, due to one reason or another! But the bands I have seen have been good. And it’s been great to reconnect with some guys from the old days and have some drinks with them. I’d set my heart on going to see H.E.A.T. yesterday but totally screwed that up”…
Dave: “They absolutely smashed it yesterday. They were brilliant”.
Hamie: “We went to see Steve Harris, that was cool, we ran into the boys from Thunder…”
Dave: “Honeymoon Suite were good, Steelheart were good”.
Hamie: “Y&T! I hadn’t seen Y&T before so that was great”.

It’s amazing how good they are. Tell us a bit about the new EP. Any surprises for long standing fans, are are you picking up where you left off?
Gordon: “Well, going back to when we were talking about getting back together, one of the first things we talked about was doing new material, and that’s probably one of the things that slowed us down most. It’s quite hard to get back in that zone. It was a little bit scary for us after all these years to get back into doing that. So we got back together, did Winterstorm, did a couple of tours, then we thought about writing new stuff. It was then a better time for us to think about it. And then it happened fairly well. It wasn’t a struggle. We produced it ourselves, we’re all fairly experienced in those areas now, and we’re very proud of what’s been produced. We just decided to do four tracks, and they’re pretty representative of where we’re at”.
Hamie: “With today’s technology it was pretty cool, because I could sing my stuff in America and then send it over to the guys in the UK. It was a good experience and I thoroughly enjoyed it”.

Hamie, you disappeared off of most people’s musical radars for a while after Heavy Pettin split originally. Did you do anything musical in that time away or have you had to re-learn the ropes now the whole thing is up and running again? “I did do some stuff straight away after the split, but then I totally vanished… I just wanted to live a normal life. I would never tell anybody I was a singer! I had a family, which kinda changes things! And it’s funny now, when we do this, and we’re back, people who know me say ‘I never knew you used to do this’! And I say ‘I like to keep this side of my life a secret!” (laughs).

Anything else you’d like the readers of Sentinel Daily to know about Heavy Pettin in 2020?
Gordon: “Well, we’re reasonably well known all around the world now, and we’re trying to somehow reach out to all those different places and get to them to play a few shows. Our agents are working on that now. We’ve never been to Australia, but if things turn out right, we’ll be there!”
Hamie: “A lot of our friends have toured in Australia recently, and that’s something we’re definitely working on. Australia, Japan, and then America. That’s our plan, but we don’t know whether it’ll be 2020 or 2021. But we’ll definitely be there!”

Any more recordings planned for release in 2020?
Hamie: “Yes, the plan was always to release this EP first but there will be an album later. We’ve got the songs, it’s going to be good”…