H-E-A-T’s Erik Grönwall: “I like that you can live stream easily via social media. You can reach out to a lot of fans that way”… 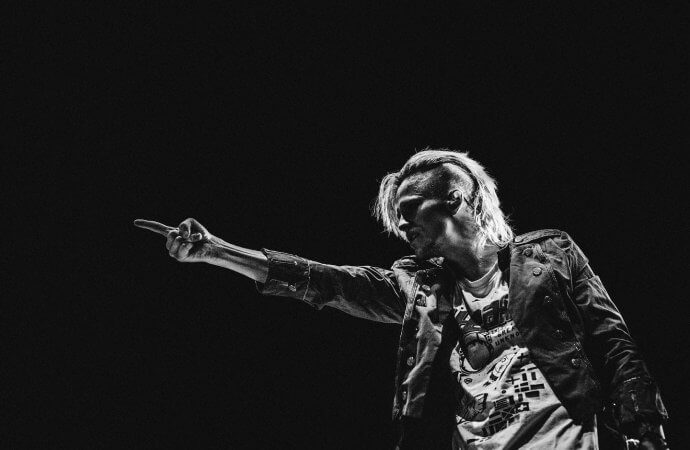 Sweden's H-E-A-T have released a fine album in II; Scott adams talks to the band's vocalist, Erik Grönwall, to find out more.

Swedish rockers H-E-A-T have released a ripper of an album in the shape of II – their sixth full-length, obvs – so of course we jumped at the chance for a chat with modern AOR titan Erik Grönwall, the man behind the mic for this magnum melodic opus…

The new album – it’s a great record, which I’m sure you knew when you put it out – but are you surprised by just how well it’s been received so far? “Yeah, actually it’s been better than I expected… and that’s definitely a surprise in many ways, although it felt very good when we decided that these would be the songs that went on the album. It’s been a very comfortable process overall, so I definitely knew that we had something good here, but I didn’t expect the number of positive reactions!”

Of course the global situation has ripped the guts out of your promo campaign for the album- “oh yes”. We really don’t know when things are going to revert to any kind of normality. Does that require more work on your part as an artist to keep the fire burning for the record? “Well, In a way. Playing live is always the best promotion for the release of an album. Obviously now we have put a check on the release process, so yes. You just have to live with it, roll with the punches. There’s not much you can do. You just have to try to find solutions for how to keep promoting the  album – live streams et cetera. Of course it affects the release”.

What do you think of the whole live stream idea – is it one that you embrace? “I like that you can live stream easily via social media. You can reach out to a lot of fans that way. In times like this it’s a really powerful tool to use to give the fans something. Also for us, who like to play live, it’s something we can do that’s a little bit beyond the rehearsal stage”.

It’s certainly catching on quickly. I switched my computer on this morning and (Canadian hard rock icon) Kim Mitchell was playing a gig from his bedroom! It certainly is a great way to keep a connection with the fans going. “Yes, exactly. And I think now more than ever you realise just how powerful it is. That you can reach out to that many people even though everything is closed! People are staying inside, which makes you realise just how important the whole social media thing is”.

We’re going to do a little quiz about the album now… I’m going to go through the tracks in order, and I’d like you to give me a sentence or two on the first thing that comes to mind about that track. “Wow… okay!”

Track one is Rock Your Body. “Jona (Tee, keyboards) presented this pretty late in the recording process… He wanted something ‘sexy’ I think he said! He wanted naked chicks and stuff in the video! So that’s the first thing that comes to mind!”

Track two – Dangerous Ground. “Adrenaline! Not sure why, but it’s such a powerful song to play live and I always get adrenaline when the guitar riff comes (starts mimicking a guitar) – it’s heavy!”

Track three on the album is Come Clean. “Jimmy Jay is the first thing that comes to mind because he wrote it! I remember he did a demo version of the song, which he sent me. And I can still hear his voice on it when I sing it today”.

Track four – Victory. “This one is a bit heavier. The first thing that comes to mind is Greta Thunberg. It’s not actually about her, more the youth rising up and telling their parents how they need to act. We’re seeing that a lot around the world these days. The youth are rising up and leading the way, in a sense”.

The next track is We Are Gods. “I see the devil (laughs). I think it’s very powerful. There are some religious aspects to this, but it’s more about how much we have built and developed and how powerful we are. It’s pretty crazy when you think how much humans have done in such a short amount of time in the universe”.

Interesting answer. I wouldn’t have placed that song in that area at all! Track six is Adrenaline. Don’t answer with Dangerous Ground! “The first thing that comes to mind is Journey! The first verse is similar to Separate Ways (he starts singing to illustrate). I always think of that song when I hear the first verse and it’s hard to get it out of my head”.

Do you get things like that in the studio when you come together to record? Do you throw things out if they sound a bit too familiar? “Absolutely. We Are Gods actually originally had a different first verse which was very similar to All Along The Watchtower. I don’t remember how our version was, but people commented on it when they heard the track so we rewrote that verse”

Track seven is One By One. “The first thing that comes to mind is Rocky, or boxing! It could be a Rocky Balboa song! In my opinion, It’s one of the best songs we have ever released!”

Next up is Nothing To Say. “The first thing that comes to mind is that I would like to have another song on the album! (laughs). We actually had another song that had the same amount of votes, but we decided that we need a ballad on the album. I preferred the other song, which is called Bring Me Back to Life, better. We actually wrote this song for the Tearing Down The Walls album (released in 2014) so it’s been in the H-E-A-T library for a long time”.

Track nine – Heaven Must Have Won An Angel. “Abba. The keyboard intro is very Abba-influenced in my opinion. Jona, when he writes songs, is very influenced by Abba”.

That’s not a bad place to start though, is it? “It’s a very good influence! (laughing)”

The penultimate track on the album is Under The Gun. “Album track. It isn’t a bad song but it isn’t a single. In my opinion it’s a six out of ten. It has a purpose on the album but it isn’t something I’d pick as a song to play live”.

That’s very interesting because that’s more or less what our reviewer Gavin Strickmann said about the song. “Oh really?”. Yes. He’ll be pleased he got that right! The last track on the album is my personal favourite, Rise. “I think it’s a very powerful hard rock song. The first thing that comes to mind is Dio. I can actually see it on a Dio album (laughs)”.

That’s quite possibly why I like it then. Well done for navigating that – some interesting insights into the H-E-A-T way of doing things. Now back to the lockdown. Here’s a question we’ve been asking a fair bit recently. Once you are in quarantine, which five albums will you want with you to help pass the time? “Okay, so I’m actually into fifties and sixties music, that’s why I started with music. So I would say Little Richard, Creedence Clearwater Revival, Elvis Presley, Queen and… the last one is always tricky… we need something a bit harder for when we get frustrated so I’ll say Cowboys From Hell by Pantera”.

Very good. Do you write much on your own? Will an enforced period of solitude be good for that process for you or do you need the other guys to spark off of? “Well I actually wrote a lot of songs earlier in my career but I’ve more or less stopped completely. I like to jam, but Jona and Jimmy are doing such a good job with the songwriting I leave it to them. I like to go into the studio and help them, in the arrangements. They come from two extreme sides of the same thing, so I’m like the diplomat in the middle! I help to find the way forward. When I’m on my own I actually like to read books, that’s the best way for me to relax”.

Now, when this whole World event ends, it’s going to be pretty chaotic with bands trying to get out on tour as soon as possible. Do you feel that you would want to get out straight away or will you leave it a while? “We’ve just cancelled a Japanese tour. We haven’t heard about the European tour but I’m guessing it will be postponed. It’s going to be very busy everywhere. Potentially we’ll actually be looking at tour dates pushed back to 2021; I personally would like to get out as soon as possible, nut I don’t think that’s going to be possible”.