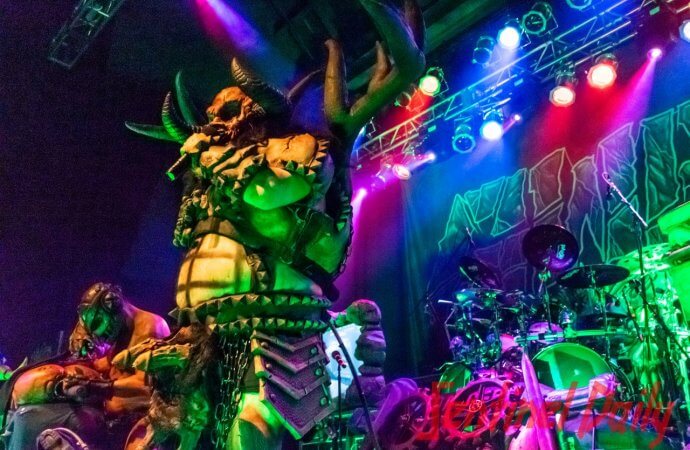 Marc Hanson takes his waterproofs out for a night of thrash metal in Utah...

Salt Lake City’s The Depot is a venue that usually books nice, safe acts – I swear to God, I think Blue October might be the house band there. Every once in a while though, there’s a break in that tradition. October 15 was one of those breaks when punks, gorehounds, thrashers and all around ne’er-do-wells showed up to terrify the staff – staff who were about to find out why their entire venue was covered in visqueen.

Against the Grain opened things up, goosing the audience with a short, Motörhead-revering set of high octane, Detroit rock and roll that likely caused a mutton chop to sprout from the face of an audience member or two. But that down-home speed boogie gave way to futuristic dystopia as Oregon-based, retro-cyberthrashers Toxic Holocaust – who just released their sixth full length album Primal Future (eOne) on October 4 – attacked the stage.

Toxic Holocaust is a prolific one-man thrash machine led by the toe-headed Joel Grind (live bass/vocals), and they generated a significant uptick in the intensity. As captain of the ship, Grind prefers to handle all the instruments on his recorded output by himself, but for live shows, he chooses to hire more-than-competent musicians to carry him through – which is why he saw only one set of footprints. Destroying the drums through the kinetic Toxic Holocaust set was Tyler Becker of Portland’s Weresquatch, whose thrash grooving is as good as anything out there. Handling guitars was Utah home-grown hero and owner of RIP Custom Guitars, Robert Gray;His raspy Out-Of-The-Cellar guitar tone being a perfect vehicle for Grind’s violent vision. Utahn’s tend to overcorrect for living in a predominantly religious area, so when Grind launched into the song Nuke the Cross the pit became a very dangerous place to be.Toxic Holocaust served as a leading indicator for the violence to come, and more than adequately primed the mosh pit for the headliner act.

After the Holocaust, there was a period of peace, love and slamming when reactivated Arizona speed metallers, Sacred Reich churned through their set of socially conscious thrash. On the heels of their August release Awakening (Metal Blade), they played a tight set of both new and classic songs. Singer/bassist Phil Rind projected a good natured vibe, at one time demanding that two fighting attendees ‘hug it out’, which caused a bunch of other concert goers to start hugging each other — multiple beefs were quelled that day…

Headlining were intergalactic scum-dogs GWAR, and the reason everything is covered in plastic. They were on trial for crimes against everything decent and good with a crazy looking judge in a powdered wig presiding, and a talking toilet as a bailiff. GWAR did what GWAR does, delivering their own brand of punk tinged thrash metal while drenching the crowd with blood and alien jizz. The climax of their set occured when vocalist Blothar the Berzerker brought beloved President of the United States Donald Trump on stage and subjected him to treatment that made Kathy Griffin’s severed head stunt look like an endorsement. And thanks to the amount of Trump haters in attendance, it might be the only time GWAR got bodily fluids squirted back at them. They closed their set with a crunching rendition of AC/DC’s If You Want Blood (You Got It). Which is irrelevant because, whether you wanted blood or not, at a Gwar concert there’s only one option — you got it.