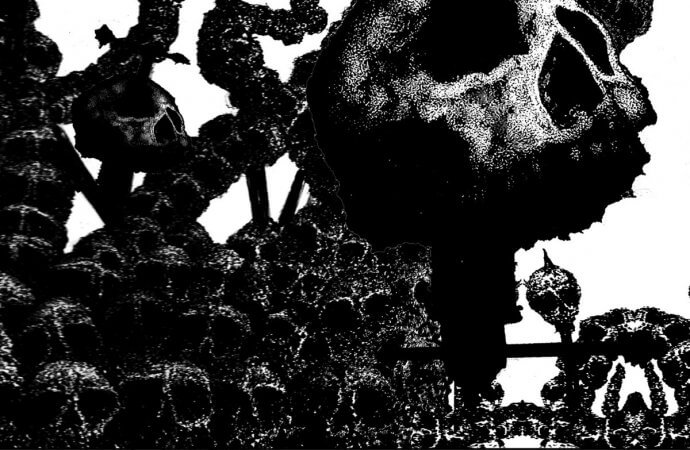 Another dose of noise-fuelled misanthropy from New York...

Last time I had cause to listen to the music of New York noisemongers Gridfailure, it was to aid my sonic battle with the cretinous individual over the way in a fight to the death to prove who had the better taste in music. I won, of course, and he no longer lives opposite, which is lucky because the new Gridfailure opus doesn’t quite possess the aural battering ram of that predecessor, …

It’s still demonstrably Gridfailure, however; you’ll still feel the urgent need for a good scrub-down after coming into contact with SM-ESII as I like to call it – but with this new album the powerviolence largely takes a backseat in favour of crawling, serpentine slithers of dystopic noise, all dredged from the nether regions of protagonist Dave Brenner’s fevered mind, ready to be transplanted into the part of your mind reserved only for the most hideous, upsetting visions…

You’re five tracks in before you even notice the damn thing has started playing; but there it is, scittering away at your nerves, gnawing the consciousness with it’s combination of twitching electro percussion and heavily treated samples that flash in and out of earshot, meaning everything and nothing – or whatever you want them to mean, really – but never doing anything less than laying suppurating seeds of worry at the back of the listeners mind.

Rapid Intensification stands out if only because the random, softly tapped drum beats no longer sound synthesised, suggesting thatbthere’s human input to this horror, which makes th track even more unsettling. The sound of rainfall ushers the track in and out, with the end drizzle providing a neat segue into the record’s centrepiece, Proven Finite.

Proven Finite is classic Gridfailure, if such a thing exists… Noises appear just long enough for you to question whether or not you actually heard them at all, whilst all the while little demi-motifs loop away, in seeming defiance against one another; for instance a soothing, plucked string trickles through the miasma of filth like aural manna from the Gods, never amounting to anything yet seemingly signalling that, even through this tide of human filth that you are being presented with, some form of hope remains. Or something.

Like all of the best of this style of music, so much is left to the listener that you may well find your response to ‘music’ like Autophagia Demonstration entirely conflicts with mine, and I guess that’s to the credit of Brenner and his legion of collaborators – Much of the inspiration for what appears here is obviously of an intensely personal nature to the creators, and yet, such is the skill with which sounds and moods are manipulated, the end result is the soundtrack to each listener’s own private hell. That’s a devil of a trick to pull off, but somehow Gridfailure have managed it here. Hats off.

Sixth Mass-Extinction Skulduggery is out on June 5th.