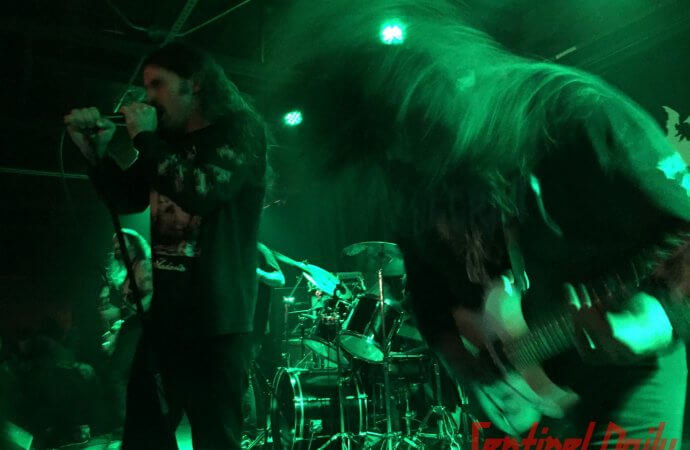 A night at the opera or a night in the sewers? Marc Hanson has to decide...

On Saturday, November 23 , Utah metalheads had an important decision to make: get all gussied up and go to the King Diamond concert? Or, break out the denims and patches to slum it with some of the skeeviest death metal acts touring at the moment. No offence to those who chose the former, but you missed out.

Opening the show were Texan hardcore thrashers Judiciary. They delivered a punishing set chock full of air-tight riffs and hardcore breakdowns. Thankfully they infuse enough thrash sensibilities into their music to keep it from sounding too ‘core’ and they projected an infectious energy that got the crowd violently involved from the first note. Judiciary released their first full length album Surface to Noise (Closed Casket Activities) in January, 2019.

Imagine if the members of Canada’s Triumph were born in San Francisco a decade later and discovered pure evil instead of the Magic Power – it would be Necrot. They play death metal the way it was meant to be played: gritty and smelling of decay; they had a look of those neighbours kids that your mom didn’t like you hanging around, because they may, or may not, have been responsible for those animals found ritually sacrificed in the woods. Actually it was during Necrot where it struck me how close this style of death metal is to good ol’ fashioned rock and roll; the Les Paul through an old overdriven tube amp, gnarly riffs, biker aesthetic and tons of swagger. I loved it and I bought a shirt – which I lost on my way home – then found it after some back-tracking through the deserted streets of 3 a.m. Salt Lake City. Necrot’s most recent release was 2017’s Blood Offering (Tankcrimes) so they’re overdue.

After Necrot left the stage, smoke began to fill the room. On both sides of the stage were two old TV consoles that played clips from retro slasher and mondo films. All of the sudden I was back to being eleven years old and I had stayed up past my bedtime to watch a horror VHS that I had snuck into the house. Exhumed is the musical equivalent of that experience of participating in something your parents wouldn’t approve of. The band are touring behind their October 2019 release, Horror (Relapse), which is an eighteen song, bowel-expelling return to their gore-grind roots, with the majority of the tracks clocking in at under two minutes. Vocalist/guitarist and primary songwriter, Matt Harvey, writes some of the grooviest riffs in death metal and newest member, guitarist Sebastian Philips, brings a classic approach to shredding, which is refreshing to hear amid the glut of current extreme metal guitarists, whose solos sound less like music and more like data. Performance-wise Exhumed was devastating.

After a mass grave was dug by Exhumed, Gatecreeper showed up with backhoes and steam shovels to bury those in attendance with layer upon layer of suffocating desert sand. Gatecreeper is touring behind their well received October release Deserted (Relapse). Gatecreeper sounds like you took the best Swedish death metal bands and dropped their Nordic asses in the middle of the Arizona desert to write music. The result is a wall of sun-baked riffs, sweaty bass lines and blistered growls from vocalist Charles Mason, who is one of the few men out there that really makes a mustache work for him.

Salt Lake City hasn’t seen enthusiastic pits like this since its underground heyday of the late eighties/early nineties. Maybe next time, King Diamond, maybe next time.