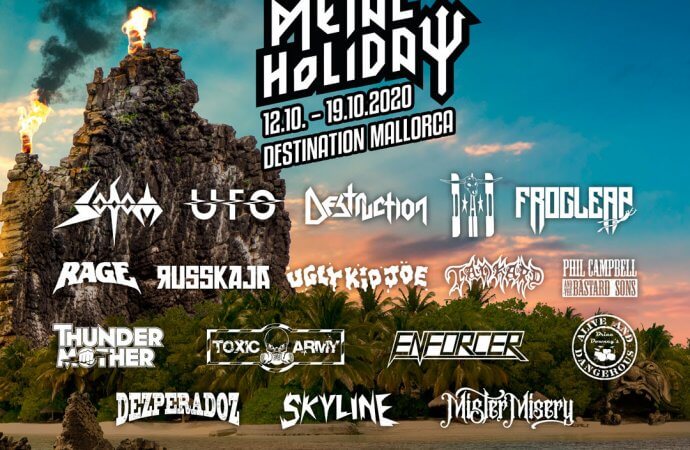 Seven bands have now been added to the billing of Full Metal Holiday. The event will be held on the Balearic island of Mallorca and will take place from October 12th to 19th this year. New on the poster are German stalwarts Rage, Motörhead guitarist Phil Campbell & The Bastard Sons, and former Thin Lizzy drummer Brian Downey will bring along a band to the Spanish island too. Norwegian Youtuber Frog Leap will also be in attendance. Sweden is even represented twice as hard rocking ladies Thundermother will be joined by gothic glam rockers Mister Misery from Stockholm. Local industrial thrashers Toxic Army will be in attendance as well.

Project manager Carsten Thöle comments: “We are confident that with today’s announcement of new bands, we have again succeeded in creating an exciting billing. In addition to often requested classics such as Rage, Phil Campbell, and Brian Downey, we have also given young talents like Frog Leap and Mister Misery an opportunity to gain new friends, while often requested Swedish rockers Thundermother will even bring along new material. This diverse mixture promises sunny days and musical fun for everyone. The next round of announcements will probably raise the level of extremity.”

More than 1,000 tickets of the third edition of the Full Metal Holidays have already found their buyers, while the hotel capacity is limited to 1,400 headbangers for a chance to experience this 7-day all-inclusive metal trip.