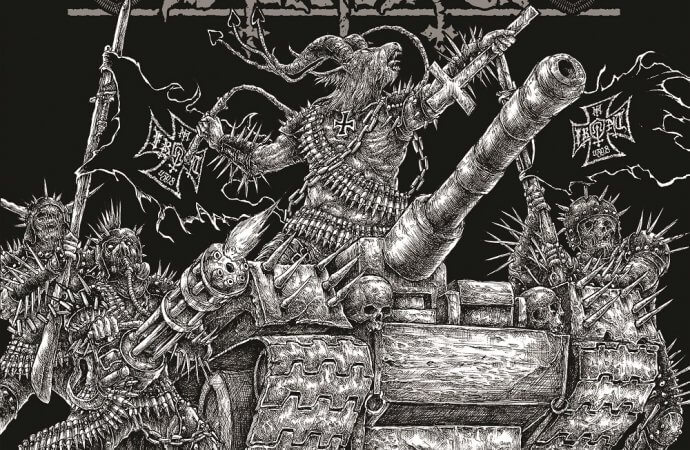 Finnish assault corps Front are back in action after an extended break!

Ah, the simple pleasures… Finland’s Front last appeared in the trenches in 2016, with their album Iron Overkill, which is described in the bio that accompanies this new release as being comprised of  ‘wave after undulating wave of teeth-gnashing speed and disgusting filth’ – and I’m pleased to report that little to nothing has changed on new EP Antichrist Militia.

Housed in the best cover I’ve seen in years (take a bow, Jenglot Hitam), Antichrist Militia explodes all over your living room, at high volume, natch, as the band land blow after degrading blow on your eardrums from the opening salvos of the title track to the closing cadences of endpiece Machinegun Blasphemy. As I mentioned in the opening paragraph, this music is a simple pleasure – primitive might be an even better descriptor – but pleasure it undoubtedly is, and I am prepared to wager a hefty portion of my furlough money  when I say you’ll be returning over and over to tracks like Iron Front, which sounds like it was dug out of my local primary school’s time capsule (buried in 1985), over the next few months.

Iron Front actually sounds like the Kilmister/Gill/Burston/Campbell iteration of Motörhead going toe-to-toe with Marduk, and Marduk crop up again as a strong reference point on next track Venom & Salt, but Front do manage to carve out their own identity, which is unusual in this genre, mired as it is in early eighties worship to such an extent. Guitarist Von Bastard likes his divebombs, sure, but for the most part he’s his own man and vocalist Kaosbringer, whilst never straying too far off the blackthrash path does at least inject enough of himself into proceedings to make a difference.

At the end of the day, a critical ‘review’ of a record like Antichrist Militia is utterly pointless – you either get Front’s schtick or you don’t. I do, and I have to say that I haven’t heard anything as good as this in this field for quite some time. Great stuff!