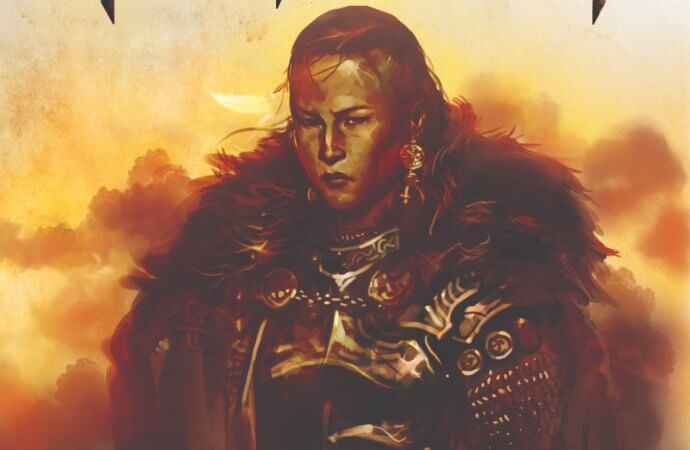 Based in Sweden though International in composition, Frantic Amber have been around the traps for a while now, but Bellatrix (which, my Grammar-School educated Editor tells me is a Latin word, broadly translated as ‘female warrior’) is I think I’m right in saying only their second third full-length.

Bellatrix is a fitting project for a unit that’s eighty per cent female, as the band take varying female warrior figures from history as the basis for the album. Sadly, for the most part, they could really be singing about their tax accountants or doctors, as Elizabeth Andrews‘ bellicose roar is barely set at anything less than battle speed, rendering the band’s musings on matters largely irrelevant.

That’s not to say the music isn’t enjoyable – large parts of the album will have you out of your seat and getting involved if straightforward death metal with melodic flourishes is your bag. Standout track musically is Khutulun – named for a Mongolian noblewoman and wrestler, natch – where the band actually dial down the death a little and just go for a more heads-down metal approach. They throw in some nice tastes of the Orient mid track too, and it’s this little bit of variation that makes all the difference.

In fact diversity would appear to be the key throughout here; when Andrews shows a bit of bravery and mixes things up a little vocally – on Joshitai, for instance she indulges in a syncopated bark/rap that brings to mind both Dani Filth and Max Cavalera, strangely – things really start to look up. For whilst there’s a certain amount of currency left still in plain old sturm und drang, it would appear that band’s really only hit pay dirt when they are prepared to stray off the path a little. When they stick to the tried and true, as they do on the furrow-browed Hunted, the result is enjoyable enough but hardly earth-shattering.

So, if the band stick to the straight and narrow a little too much on Bellatrix, there’s evidence at least that they are prepared to do a bit of risk/benefit analysis every now and then. Let’s hope we’ll benefit from a bit more risk next time around.

Bellatrix is out on August 23rd.