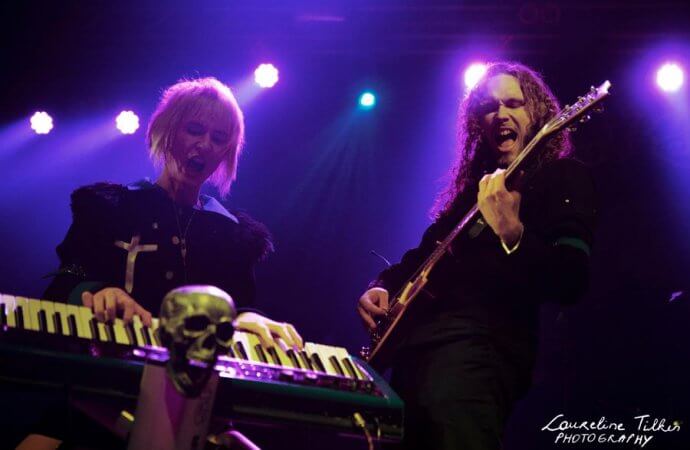 Our resident underground metal aficionado Ferry Templeton is back after a little holiday to bring you some of the best new sounds currently doing the rounds...

It’s been a long time coming but we’re here at last!

Oh how I’ve longed to get that lyric from Rock City from Saxon‘s Crusader album into a Crusade of Power column… and now I have! Suitably refreshed from a break, the Crusade returns to bring you more of the best Underground metal from around the globe! We’ve got a packed edition this month so I’ll shut my trap and let you all get on with the serious business of rocking! enjoy! 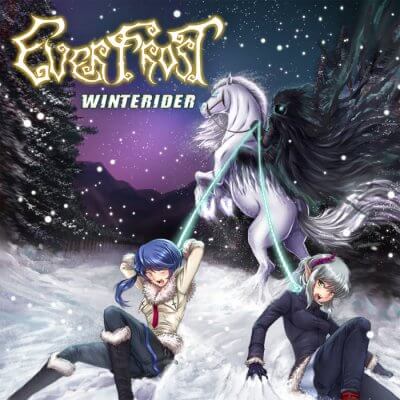 First up this month is the insane sensory overload that is Finland’s Everfrost. Ostensibly a straightahead power metal outfit, Everfrost actually throw all manner of kitchen sinks at their music in an effort to overwhelm the listener from all conceivable angles.

This isn’t just fast-paced assault and battery a la Dragonforce, however; In fact, Everfrost’s sound is cut from far more ‘classic’ cloth; the complex vocal arrangements of Mikael Salo have more than a whiff of prime time Savatage about them, whilst Benji Connelly’s ivory soundscapes weave names like Queen, The Darkness and Dream Theater together to create a veritable maelstrom of melodic madness. Throw in the superior shred power of guitarist Markus Laito and you can see that this is a band that has absolutely all bases covered, and then some.

Throughout new album Winterider I was looking for weak link of some sort, but there quite literally isn’t one detectable to the human ear. If you hear the spectacular Juhannus in January and remain unmoved I suspect there is no helping you… This is over the top, gloriously pompous, stuff, and I love it! Release of the month and then some! 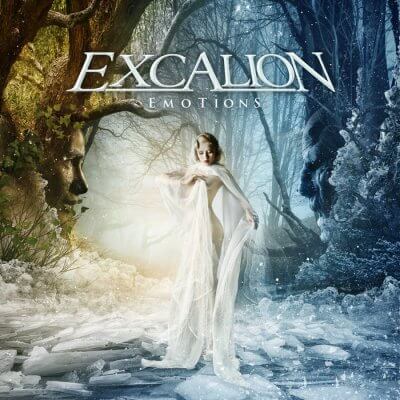 Staying in Finland our next act is the always-excellent Excalion; Their ‘comeback’ record of a couple of years ago certainly floated a few boats in the Sentinel Daily office when it was released and I expect largely the same kind of reaction this time around. Put simply, Excalion deal in no-frills yet simultaneously pomptastic power metal, delivering exactly what the listen expects yet doing so with so much verve and skill that complaint is rendered pointless.

If you love this kinda stuff, then tracks like Sunshine Path are gonna draw you in within seconds of hearing the parping keyboards of Jarmo “Jappe” Myllyvirta. If not, you’ll have moved on to something else with similar celerity. It’s as simple as that really. But I’ll wager most of you reading this will be lapping up Emotions – that’s the name of the new album – and quite rightly so. 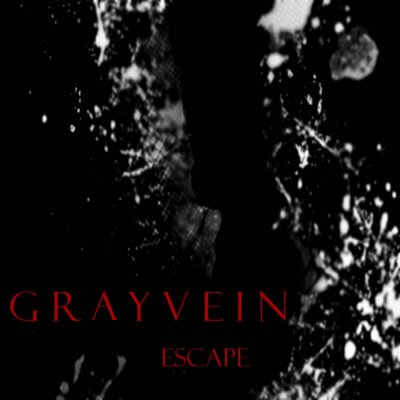 New Jersey duo Greyvein (consisting of Michael J. Rocco and Kristina Rocco – I’m not sure whether they are a husband and wife or brother and sister team) have just released an album, entitled Escape that’s a bit leftfield for the Crusade but which definitely contains enough moments to warrant inclusion here. Opening track Lights Out has a nice Type O Negative vibe to it musically, though Kristina thankfully doesn’t try to ape Peter Steele vocally!

Second track Across The Sky is a little ‘prettier’ though the shimmering synths still add a gothic feel to proceedings. A superb vocal gives a hint that perhaps Kristina is happier on this style of material (not that she struggles with the heavier tracks). Production values are basic – this is DIY stuff after all – but that doesn’t detract from one’s overall enjoyment as songwriting is accomplished throughout. If you enjoy gothy rock that mixes pop choruses to doomy riffage then this name your price release is well worth some of your time. 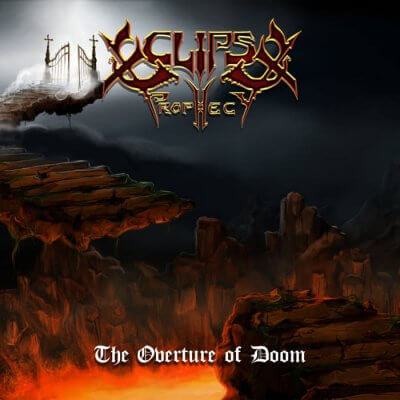 Far more in sync with our usual fodder are Canadians Eclipse Prophecy, whose brand of prog/power is highly polished and accomplished. Their new EP The Overture of Doom is sure to appeal to anyone who enjoys metal on the grandiose side; The Order of The Mythic Dawn (Dragonborn) has a real feel of pre-Labrie era Dream Theater to it, though these guys are probably a tad more metal than that if truth be known.

As if to prove that fact they’ve thrown in a raw live track for your enjoyment on this EP which shows them to be a fiery bunch of buggers in the live environment!

On the evidence of this five tracker Eclipse Prophecy are more than ready to take their metal to the masses, with the band’s slick mix of bombastic riffage and razor sharp leadwork seemingly having everything required to make the next step. Vocalist/guitarist David McGregor leads from the front, but this tight unit is very much a team and that teamwork shines through on killer cuts like Under Shadow’s Veil. Let’s hope they get a full length out soon! 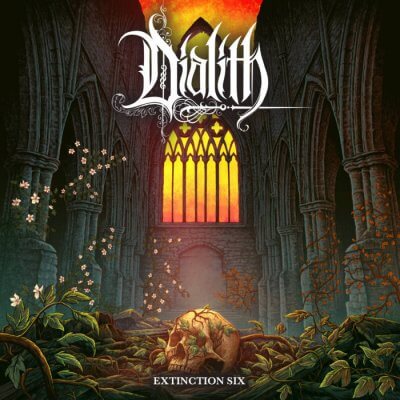 American symphonic power metallers Dialith have put together a supremely classy new release in the form of the very appealing Extinction Six. Essentially built around the beguiling, crystalline voice of Krista Sion and the contrapunctal abrasiveness of Alasdair Wallace Mackie’s striking axework, tracks like Libra look set to become regular visitors to the Templeton stereo in the days and months to come.

Charles Woodruff’s keyboards are pretty perky, too, his accompaniment on the otherwise savage Break The Chains driving the band close to classic AOR waters for a split second… it’s a heady mix when the band get things right, which they do more often than not, and Dialith really have created an album here that you’ll find yourself returning to time and again as the album gives more of it’s secrets away with repeated plays. Top notch stuff! 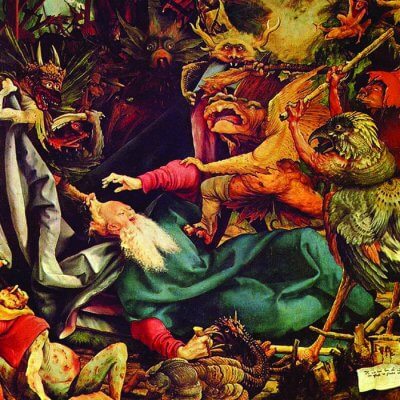 Warlock rock! That’s the snazzy moniker Americans Ole English have come up for their brand of stoner/doom, and who am I to argue? There is indeed a wizardly air to the band’s low slung groove, a playfully mercurial skip in the step that belies some serious heaviness going on at the same time. Imagine, if you can, a heady mix of Cathedral’s lowdown, loping grunge, the sword n’sorcery siren song of Gygax and, perhaps a little Alabama Thunderpussy for good measure and you’re getting close to the delirious noise generated on the opening track of the band’s new five tracker, Paladin.

Second track Old Man heads back to the dawn of hard rock in the early seventies for it’s inspiration, Nick Harvey and Lynden Segura’s twin axe assault slithering in serpentine communion around the rock solid rhythms of Magnolia June and drummer Austin Wood. Come to the Sabbath indeed! Whilst it’s unavoidable with this kind of music to retread a little ground, Ole English attack the task at hand with enough enthusiasm to keep things fresh and moving forward whilst unabashedly looking backwards for inspiration. It’s a balancing act, for sure, but one which they’ve undoubtedly pulled off this time around. Kudos!

And that’s that for this month – it’s a joy to be back on parade, and as ever I’m keen to hear any comments or suggestions you may have for future editions of the Crusade.
Hail and Kill
Ferry