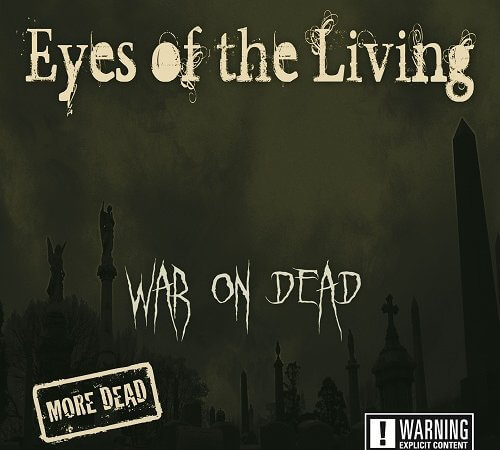 Philly bruisers Eyes Of The Living may only have been existence for three years, but their quartet of members can draw upon a collective century of years in bands and that experience and professionalism shine through every aspect of their new album War on Dead – More Dead.

At their best on tracks like Chemical Bath, the band sounds like a well thought-through modern thrash take on old names like Sacred Reich and Overkill, but there’s enough variation displayed throughout the album to mark the band out as more than mere nth generation thrashers. Infected displays a melodic sensibility not always found in bands of this ilk, and if the band do occasionally drop into a bit of a Pantera/Lamb of God-informed rut – there’s a lot of riffage here, which occasionally seems a bit perfunctory or ‘for the sake of it’ when compared to the band’s more dynamic material – then the good moments – of which there are many – more than make up for it.

Stench of Death has a nice hardcore edge to it, with memories of Pro-Pain at their finest prompted by Tim Swisher’s barking delivery and the spirited gang backups. Elsewhere Swisher’s six-string compadre Mike Straiton stakes his claim as a lead guitarist of no little ability with some excellent work on the catchy Pull The Trigger, whilst the title track has a far more progressive feel to it, eschewing mere bombast for a more structured thoughtful approach that points to an exciting future awaiting in this direction should the band choose to pursue it.

Lots to enjoy then, with the band really firing on all cylinders throughout an album hat really doesn’t betray an real weaknesses at all. If you love straight-up, no-holds-barred heavy metal then you’ll find as much to enjoy here as I did.

War On Dead – More Dead is out now.