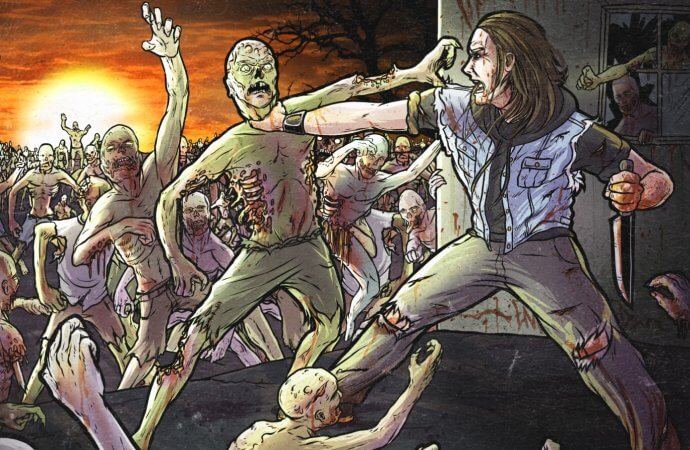 Stunning return to action from these Melbournian metallers...

Melbourne’s Envenomed are back! And whilst it’s more or less half a decade since their last full length, Evil Unseen, landed, the band’s thrashened trad metal template remains largely unchanged. This is pleasing to report, as the band really are masters of this particular metal niche, and as our elders and betters often tell us, things that aren’t broken often don’t need fixing…

If you were a fan of Evil Unseen, you’ll want to put aside some pennies to effect a purchase of The Walking Shred immediately; tracks like the quite superb and very epic Fate Closes The Door take that already-mentioned template and wring every last ounce of dramatic juice out of it, battering the listener with wave after wave of craftily-honed heavy metal thunder that calls on a direct line to the old Gods of the genre whilst still managing to sound fresh and entirely relevant to the demanding ears of today’s metal fan.

Rebellion is just as good – in fact it’s better, if we’re being truthful, which we try to be in these appraisals – marrying the muscular, wall-of-sound riffage of thrash to a melodic sensibility very much along the lines of Canadian Sentinel Daily faves Striker. In 2019, this is about as good as melodic metal gets, and there’s no doubt that Envenomed are ready to break out onto the world stage if Rebellion is evidence worth taking into account. Which it is. And when the band go full-thrash, as they do on the banging Sacrifice, they do so with a steely-eyed glint in the eye and a massive, unyielding deployment of chug power that won’t fail to bring a smile to the dial of anybody who ever owned a denim cutoff and a pair of white hi-tops. Verily, this is the real deal, thrash fans!

The band cheekily throw in a version of Lenny Kravitz’ Are You Gonna Go My Way by way of a bonus offering, and unsurprisingly they make it work and then some. Unsurprising? Well, the track was never anything more than a clever reworking of a cast-off Saxon riff in the first place, which theoretically puts it bang up the Envenomed alley. They let now one down with their reading of the track, burnishing the song’s metallic appeal in the process. Everybody wins!

Well worth the five year wait, then, and quite probably a must-have album if you like to think of yourself as a heavy metal fan of taste and style.

The Walking Shred is out on July 5th.