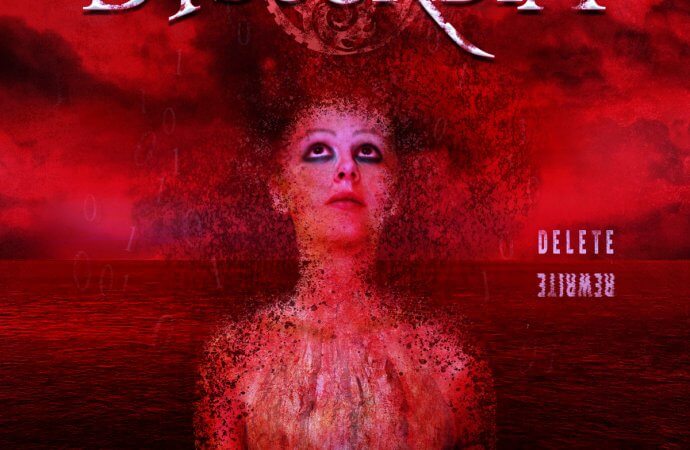 Belgian progressive types Dyscordia have been around for a decade or so now, slowly carving a reputation for themselves as melodic metallians of no little merit. Progress has been slow but sure – it’s nearly four years since their last effort, Words In Ruin, came out, but the band were determined that the wait for Delete/Rewrite would be worth it – and they were largely successful in that aim.

Expertly recorded by the famed Jens Bogren at Fascination Street Studios, D/R is the work of a band comfortable in it’s own skin and surroundings yet not afraid to redefine its own frontiers and parameters. Although guitarist Stefan Seegers contributes a fair bit of deathly grunting throughout the album, the band’s outlook is generally on the melodic side; Second track This House manages to combine muscle and melody quite nicely, with all three guitarists playing with sufficient restraint in the service of the song. Things might get a little ‘over beefy’, if you follow my drift, with eighteen strings ploughing away at the same time, but never do you walk away from a song feeling battered by overkill. And that’s a good sign.

The jagged rifferama of Rage is another highlight; Wouter Debonnet drives from the back here with wicked precision and power, whilst the music veers all over the place, at one moment reviving memories of Evergrey, then Flotsam and Jetsam, now Opeth at their most straightforward. That the band retain control of the whole thing as it threatens to career into the abyss is testament both to their instrumental skills and songwriting smarts – You don’t hear many ‘unknown’ bands handling material like this with such accomplished aplomb that often.

The Curse of Mediocracy sees vocalist Piet Overstijns giving perhaps his most assured performance – bolstered by Seegers and his gravel throated roar – and this song is perhaps where everything clicks in best fashion for the band. Guy Commeene rips out a classy solo to top things off and the melodies display a pleasing stickablilty that means you’ll find yourself humming Overstijns’ vocal refrains some time after the songs end.

The second half of the album kicks off heavily, with the superb Castle High, which again features some superb lead work, as does The Cards Have Turned, wherein the band head to their most melodic waters; However the insistent rhythm guitars and relentless drum barrages ensure that, even though the refrains are among the most alluring on the album, no downgrading of heaviness is allowed to creep in! A win-win situation ensues!

The two longest tracks, Stranger To The Dark and Silent Tears, sit together towards the back end of the album and, despite being of a similar quality to what’s gone before, just take the edge a little off of the momentum the band have thus far built up. Performances are still top drawer, don’t get me wrong, but to these ears things just get a little stodgy here. But maybe that’s me being old fashioned and listening to an album, in order, from start to finish!

The album ends on a lighter note with a multi-tracked a capella vocal piece, which again takes a little away from the metal quotient of the album; that said, the front end of Delete/Rewrite is loaded with enough metal to keep most ears happy, and Dyscordia definitely have taken a step forward with this album, which really was worth the wait…