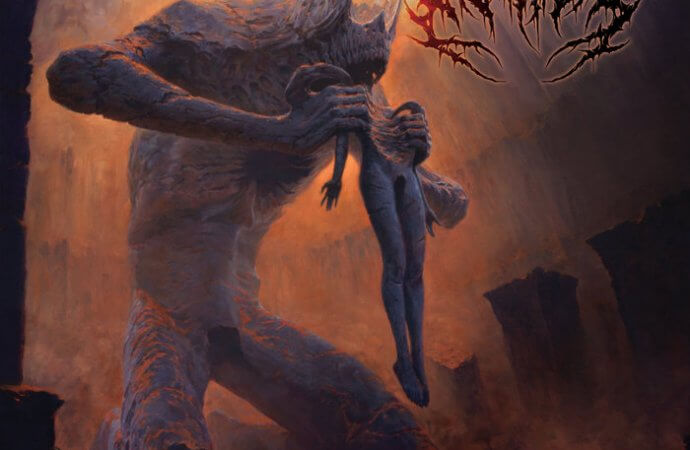 Formed in 2009, Australia’s Disentomb has spent the past decade honing their craft and are now positioned to become one of the premier modern death metal bands.Their debut album, 2010’s Sunken Chambers of Nephilim, saw the band releasing rather standard (some would say sub-standard) brutal death metal, with tech(ish) leanings. However, peeking up through the mud of the poor production, were chunky little nuggets of uniqueness; the occasional diamond that had potential to – one day – outweigh the dross. And that began to happen on their 2014 followup, Misery. Boasting a much improved production and song-writing sophistication that was absent from their debut, Misery is an example of Disentomb quickly finding their identity. While not a masterpiece, Misery, with its catchy riffs and cleaner sonics, was miles ahead of the debut and a solid slab of blasphemous bedrock to build a legacy on. Which brings us to The Decaying Light…

The album opens with the melancholic Collapsing Skies, a doomy two minutes that almost caused this borderline narcoleptic to choose to get a full eight before giving the rest of the album a chance. I get it – a little headfake before the head stomp – and God, does this album stomp. As soon as the death rattle from its opening track fades, the kinetic Your Prayers Echo Into Nothingness (featuring Matti Way of Abominable Putridity) sets the pace and for the next forty plus minutes, dragging the listener into a sonic nightmare of despair and corpse ridden landscapes.

On first listen, Disentomb’s latest output has the punch and immediacy of any above-average death metal band, but repeated spins of The Decaying Light reveal a depth that sets them apart from the rest. It’s quite technical, but not in the antiseptic ‘I haz amp plug-ins!’ kind of way. The guitar tone is organic and warm, which in some ways, could turn off those who demand nothing less than pure brutality from their metal. That’s not to say The Decaying Light isn’t brutal – it is – but it’s broad spectrum brutality, covering all the ground that lies between blast and slam, a feat that’s executed perfectly on the track Undying Dysphoria. I’ve established that it’s brutal, but one thing I can’t say is that it’s ugly. It’s beautiful, actually. Disentomb guitarist, Jake Wilkes, spring loads each track on A Decaying Light with memorable guitar riffs that tumble out like thick coils of viscera, propelled by the relentless precision of Disentomb’s rhythm section Henri Sison (drums) and newcomer, Adrian Cappelletti on bass. The music is repetitive enough to be hypnotic, but intricate enough to keep the tech-heads hitting the replay button. Include the belching vocal narrations provided by singer Jordan James Phillip and you have a formula that’s hard to beat.

Metal seems to be adhering to strange a version of Moore’s Law where each year, and with each release, the quality is getting exponentially better, Disentomb’s trajectory of improvement over just three albums being a perfect example of that. A Decaying Light could be described as thinking man’s slam, creating a bridge between the primal stylings of Vomit Remnants and Ingested to the spiritual prog-death of Fallujah and Cynic.

2019 is shaping up to be a monumental year for death metal and it won’t be surprising to see Disentomb’s A Decaying Light make to many of this year’s Top Ten lists.

A Decaying Light is out now.