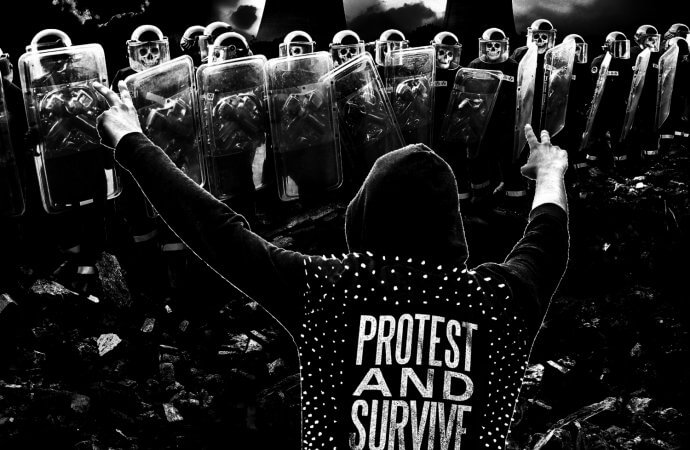 Uneven, at times exasperating retrospective of one of Punk's most important names...

Ah, the irony… Discharge, perhaps the greatest agit-punk band of all time, the progenitors of d-beat and the band lauded for their hard held beliefs through the ages almost as much as Crass, end up being compilated on Global mega-label BMG. The man gets us all in the end, I guess.

But for all that introductory carping, as an old punk who was around at the time I can remember just how important a band Discharge were. I always preferred their offshoot Broken Bones, to be honest, but there’s no denying the power of the Hear Nothing, See Nothing, Say Nothing manifesto. Unfortunately this compilation opts to veer around wildly with it’s track listing; I’d like to have seen more of a timeline involved, charting the band’s progress from their Pistols-inspired roots, through the grim Motörheadisms of their heyday to the broad, sunlit uplands of the crossover power of 2002’s self titled comeback record. But that’s just me.

Anyways, what you get on this new EP are to CDs or a double splatter vinyl extravaganza if your prefer, which features many of the band’s highlights on disc one and a selection of oddities and live tracks on CD two. But again, omissions are rife – Ain’t No Feeble Bastard from 1981’s Why EP is here, and a very welcome inclusion it is too. But why no They Declare It, the undisputed winner from their fabled Realities of War seven incher? Something as boring and prosaic as licensing problems I shouldn’t wonder.

But enough old punk moaning. Better just to strap yourself in and wallow for a while in the black sheets of hoplessness conjured up by the likes of the still-superb State Violence State Control and The Possibility of Life’s Destruction. Or Accessories by Molotov; If there’s one thing that springs to mind when listening to CD 1 of this package it’s how good that 2002 effort on Sanctuary Records really was.

CD2 features the band’s 1977 demo, which is worth a listen if only to note how far the band had come on by the time Realities of War was released, along with some of the classics re-recorded during a session in 2004 and some live bits and pieces. But, strangely, there’s nothing from the band’s ill-advised excursion into arena rock, 1986’s Grave New World…

I’m sorry. I said no more carping. Look, if you already love Discharge you should have most of this anyway, old demos aside; and If you are new to the band and curious I’d recommend having a root around in your nearest record and tape exchanges for some original material first, then come to this later for the collectible stuff. You’re very welcome.

Protest and Survive is out o February 21st