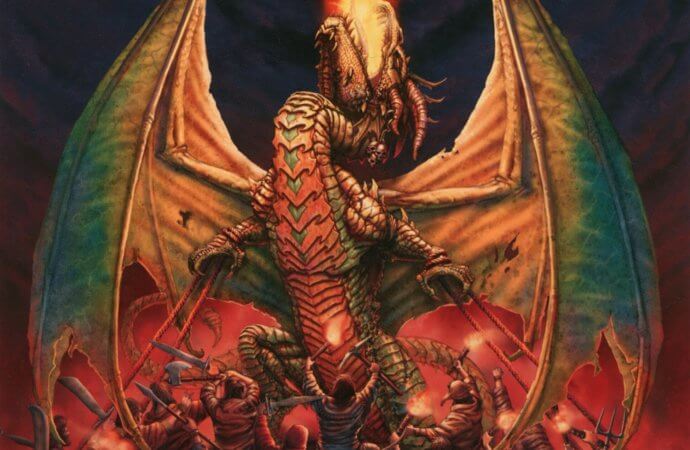 When Dio’s ninth studio album, Killing The Dragon, emerged in 2002 it was rightly welcomed as something of a return to form; the first album to feature former Lion/Burning Rain six stringer Doug Aldrich and again featuring returned original bassist Jimmy Bain, it’s arrival on a metal scene largely ruled by numbskulls of the order of Linkin Park and Disturbed when largely unnoticed by the wallet-chained masses until the patronage of puissant Hollywood face Jack Black for the video for single Push led to a mini-renaissance in Dio-the-band’s fortunes.

It’s a shame that Black got the credit for this, since in reality the album actually was the strongest thing Ronnie James Dio had released for a long while – certainly since 1990’s Lock Up The Wolves. Aldrich also received a lot of credit for this state of affairs, though his contribution to songwriting was limited; the best songs on the album, Push, the epic Rock & Roll and the Hear n’Aid follow up that never was, Throw Away Children, were all co-written by departed guitarist Craig Goldy, although there’s no denying that Aldrich’s slick lead work lit up every song – his wah-wahed outro solo on Scream being particularly impressive.

Better in the Dark reprised Dio and Bain’s tenure in Rainbow, rattling along on a superb riff and benefitting from a superb delivery from our diminutive hero. However the album was defined by the stentorian one-two punch of Rock & Roll and Push that occurred midway through the album; both are classic Dio, the former utilising a Sabbath/Zeppelin martial beat designed to level the sort of arenas that the band had stopped playing years previously, the latter a straightahead slice of the sort of melodic metal Dio had perfected on albums like Holy Diver and The Last in Line. This was a real and tantalising hint that Dio – the band and the man- were on the verge of reanimating their legends, entering a new phase of metallic fecundity that might indeed herald a new golden age for classic metal.

The latter thing actually happened, of course, though not sadly with Dio at it’s helm. Aldrich left for greener pastures in Whitesnake, prompting Dio to recall Goldy for what turned out to be his final album, 2004’s ultimately disappointing Master of the Moon. Dio passed away in 2010 after a fruitful return to Black Sabbath under the Heaven and Hell Banner, never to return to solo project and leaving Killing The Dragon as the last truly great piece of solo work in his canon. BMG have now re-released the album in tandem with Dio’s other later albums Angry Machines, Magica and Master of the Moon, all of which have bonus live tracks appended. Killing the Dragon features half a dozen live cuts taken from it’s supporting World Tour, which will give listeners a good chance to hear Aldrich’s excellent readings of classic Dio and Sabbath material, although none reside in the ‘essential listening’ domain. Completists will be interested, of course, but they don’t make compelling enough reason for purchase on their own. However, if you lost track of Dio, as many did after 1987’s Dream Evil, then this is well worth seeking out as documentary proof that Ronnie James Dio still had the mojo later on in his career.

Angry Machines, Magica, Killing The Dragon and Master of the Moon are out now.