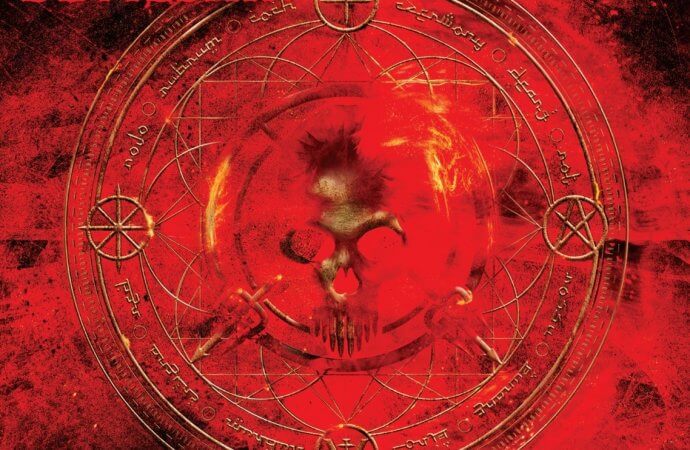 Once in a while a band comes along that breaks all the rules and delivers in spades. Devilskin is one of those bands, and with their third album Red, they have completely rewritten their own rules. The quartet, hailing from the Shaky Isles (that’s New Zealand to all our non-Antipodean readers – Ed), are about to release an album that has their heart and soul throughout it’s vinyl offerings.

I first was introduced to Devilskin when Sentinel Daily Ed, Scott Adams, suggested I take their last album Be Like The River for a spin to review. Wow! I was hooked from the first listen, you can read about that here; This band is really something special, and I went out and bought their amazing first album We Rise immediately. Both albums ended up hitting number one in their native New Zealand. So, when I found out they were releasing a new album, I just had to get my hands on it as soon as I could.

Red is the universal colour of passion, vitality, blood, danger, romance, anger, horror and love; everything evocative. Of all the colours, red is a warning and a statement.  Recorded at Roundhead Studios Auckland mid-2019 with the award-winning team of producer Greg Haver, and engineer/mixer Simon Gooding. The release notes indicate that this is the bands most complex, complete and confident collection of songs yet.

The album kicks off with a visceral, kick ass track, in the form of Do You See Birds?  This track reminds, if you had forgotten, what Devilskin is about.  I have seen comments on their Instagram account with people really reacting strongly to the teaser line from this song.  The song kicks off with a nice little repeating lick from Nail (guitar) before the father and son sonic rhythm team of Paul Martin (bass) and Nic Martin (drums) add some weight to it. Jennie Skulander joins the fray and her voice hits like a sonic barrage. So, if you had any thoughts Devilskin had headed down a softer road with the last two singles being clean vocals this tells you otherwise. The track moves along at a crisp pace and I find my head nodding along appreciatively.

The next two tracks are two of the singles released in All Fall Down and Corrode. I have had both tracks on high rotation on my Spotify play list since they were released. For those who have been living in a vacuum, get out there and get your heads around these tracks as they are brilliant. The songs are both very different in their approach but highlight how effective this band is.  They don’t try to be flashy in their playing, it is solid and tight throughout and shows a pride in their craft. What grabs me is the hooks that they have in these songs, each track just has something that always grabs my interest and invites me to immerse myself in it.

Eyes Red Heavy is next up and is one of the best on the album for me. It continues the message of Red throughout the album with a lot of the songs hinting at the colour, the passion, blood.  A moderate tempo track that builds and builds throughout, a nice solo that supports the track in its build and then reaching the crescendo of Jennie’s voice finishing off the track with a wave of emotion before an instrumental outro.

Same Life kicks off with a beastly bass line from Paul before raising the tempo with Jennie in dirty vocal range again throughout the verses but a catchy and easy to sing along clean verse. Another higher tempo song, The Victor is a song about a car crash that the band came across on the way back from recording one weekend. It is a great upbeat track about hope that has come from a horrible situation. ‘Take my hand and we’ll get through this’”.

Blood and Bone continues the more moderate tempo tracks and is a track you could imagine being on a soundtrack for a fantasy epic.  It has that epic feel about it and ominous bass lines throughout.

Endo is the first single released and is a great track, documenting Jenny’s battle with Endometriosis. Bright Lights addresses the ways to get through being on the road a lot.

Sweet Release is a highlight of the passion of the band for me and shows the sum of what has put into the album. It is a song of sadness and loss, but also a plan of how to overcome. Another song that just continues to build from start to finish, driven by the bass and muted drums with a precise solo that just provides a background to emphasise how good Jennie’s voice is. The passion that comes out in the crescendo of the last “Let the river flow through me…” from Jennie is heartfelt.

Everybody’s High But Me is a fun, upbeat number that brings you back after the raw emotion of Sweet Release. More reminiscent of songs from the first couple of albums it is an enjoyable track.

Be Like The River continues the trend with a song of the previous album’s title. The song has a bluesy, jazz funk sound to it that swaggers along all the way through the track. The bass licks here are some of my favourite on the album.  Unfortunately, what seems all too quickly, it is over, and I find myself just putting it on one more time…

Red will be available on Red and Black vinyl and all the other usual formats from April 3rd, 2020; fans also have the opportunity to secure a special limited-edition deluxe box set.  In a world that seems to be highly crazy at present, this album represents a pleasant way to lock yourself away in social isolation for an hour at a time.  Go grab a copy.