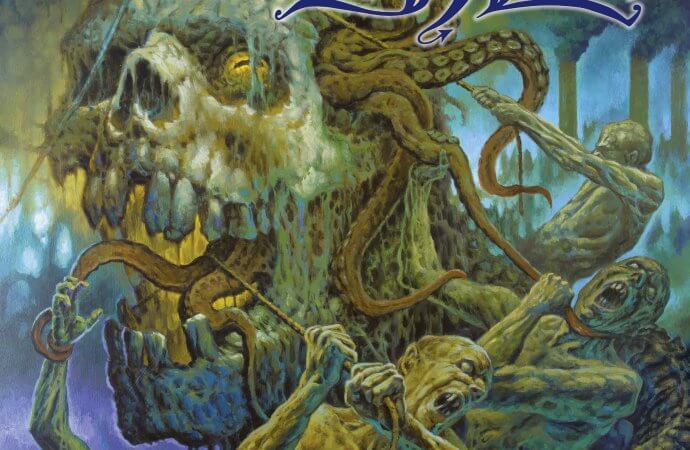 Japanese vets showing no signs of slowing up...

Death metal as a genre is all over the map — musically and geographically. Lately it seems to be settling into a sonic sweet spot between old-school dirt and modern technicality; Japan’s Defiled sits neatly within that sound space. And with bands like Gatecreeper and Blood Incantation starting to achieve a level of mainstream acceptance which is rarely seen in the underground, Defiled’s Infinite Regress (Season of Mist) might just be the album that gives these twenty six year veterans-of-brutality their dues.

With the exception of the short intro and outro, the tracks on Infinite Regress take you on an unnerving journey through suffering and death — but in a good way.

Defiled stitch together slippery, angular riffs into a jarring stop-and-start style with the purpose of putting the listener into a perpetual state of discomfort. There’s a ton of uneven modulations and tempo shifts throughout the album that induce an almost motion sick feeling while listening, but thankfully, Defiled has an ability to deliver plenty of hooks and just enough groove to make all the dry heaving pay off in a proper purge.

The guitars are chunky and balance themselves nicely between being aggressive and old school to articulate and defined. Jim Morris of legendary death metal factory, Morrisound, is responsible for the mix on Infinite Regress, and it shows. There is a very “Florida” vibe to the album that’s classic without being retro.

Overall, Infinite Regress is fourteen short, to-the-point waves of nausea, with most of the tracks clocking in under three minutes and delivered with Japanese precision. This latest album proves Defiled are more than capable of creating sick, stab-you-in-the-guts death metal that will send you into a hopeless abyss of madness and despair — and they’ll still politely remove their shoes before entering your house.

Infinite Regress will be released on January 24th.