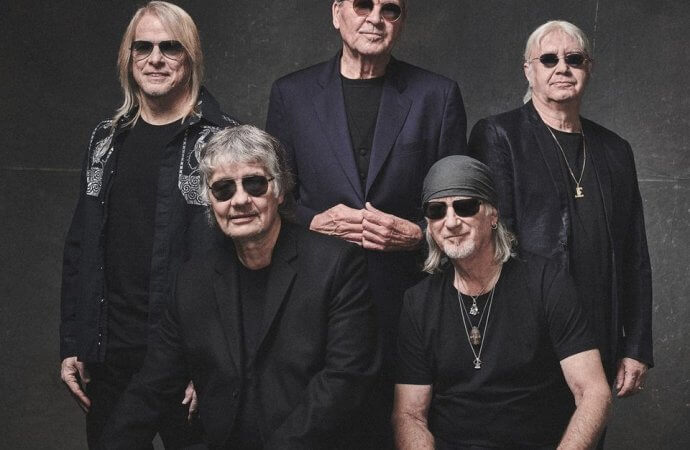 Veteran rockers Deep Purple aren't letting anything - even a global pandemic - slow them down as they enter a seventh decade of seismic activity...

It’s not often you get the chance to talk to a bona fide heavy rock legend – certainly not one who has been a part of your regular musical diet for over forty years. So when the chance came up to chat with Deep Purple keyboardist Don Airey about the band’s new and very wonderful album Whoosh! (earMusic), to say I was keen would be the understatement of the year. Once we’ve arrived at sound levels we’re both happy with across the ether it’s down to business…

The album has been out a little while now – are you happy with the reception for Whoosh! you’ve seen so far or are you not particularly bothered about reviews anymore? “I’m always bothered about reviews! I have an application on google that notifies me when they come in so I see most of them. They’ve been very good so far. Quite an amazing some of them. We even got one from The Spectator, which is a British political magazine. They gave us a good review!”

Now I always ask this question to musicians who have an album just out or just about to come out – but I don’t think I’ve ever asked it to somebody who has been involved in the release of quite so many albums in their career – do you still get nervous on release day? “Yes, you wonder how it’s going to do. I used to have a wonderful accountant who said ‘making things is easy – it’s selling them that is hard’. That applies very much to the music business. You slave away at an album, present what you think is your greatest work… and really have no idea what people are going to think of it. And that really is quite nerve-wracking”.

I guess those thoughts from your accountant have never been more prevalent than they are in today’s music industry, where many people now think they should get the sweat off your brow for free. “There’s no better deal than free (laughs)”.

You’ve been in the band eighteen years now, and Whoosh! is the third album you’ve recorded in that time with producer Bob Ezrin. How would you say the band’s relationship with Bob has evolved or developed over that time? “Bob never changes, really – he’s always the same. He’s like a whirlwind when he comes into the control room of the studio. He makes everyone jump to it – he’s full of ideas, and he knows what works and what doesn’t. He’s very ‘old school music business’, which is something we’ve been used to, and relish, actually – somebody barking orders puts you in your place, you know? My son Mike is my keyboard tech, and he’d never encountered anyone like Bob before. By 2012 the music business had become rather polite, nobody bad-mouthing anybody or saying anything out of place… and when Mike met Ezrin it was a bit of a shock for him. I don’t think he liked him much at first. But then they became great friends, when Bob saw what Mike does for the band and when Mike saw the effect that Bob was having on us as a band… that’s the way Bob is – you can take him or leave him but it’s best to take him!”

You obviously like that pressure, when you’re in the studio? “There’s nothing worse than a perfectionist saying ‘that’s not quite right, can we do it again?’ – that’s what you dread. Having to do ten or twenty takes of something. Because you know that the best take you’ll do is the first, second or third. And that’s what Bob Ezrin gets out of us – he gets us ready for that. In rehearsals and preparation he gets us ready so that when we get in to the studio we can work to the best of our ability. There’s a certain tension – actually there’s a lot of tension – in a recording studio. You are faced with the truth. About yourself (laughs). When you are recording a song’s first take you’re nervous, because you don’t want to make a mistake. And everyone is like that. So there’s a certain tension, an electricity that creeps into the track because of that. And I think that’s the best way to do things. It’s what Bob Ezrin brings out of everybody – spontaneity”.

I think you can certainly hear that on the album. There are places where it really doesn’t sound like the work of ‘rock veterans’. “It’s very fresh. I think the first album (2013’s Now What?!) he gave me a couple of hours to come up with some keyboard overdubs; On Infinite (2017) he gave me an hour and a half. For this album he gave me about ten minutes! Most of the keyboards on this album are completely live – solos and everything”.

I was listening to the album before talking to you today, and I especially love the interplay between you and (guitarist) Steve Morse on Nothing At All, which is just majestic. Given what you’ve just described, is there a moment in the studio when you look at one another and know that ‘this is the take’? “With Steve it’s funny – he concentrates so hard I think his eyes are shut. He’s looking to the heavens but his eyes are shut! The person I always watch in the studio is the drummer. And who better to watch than Ian Paice? With a backing track, the groove is the important thing to get right. Those fancy bits that Steve and I did on that track, you can relax a bit because you can do them again if you get them wrong. As it turned out, we didn’t need to do them again, because it’s more or less live”.

Overall this is your fifth album with Deep Purple. Would it be fair to say this is your favourite? Do you generally have good memories of all the albums you’ve done with the band? “I like the first one (2003’s Bananas) – that was a very enjoyable one for me. I was back in LA, in a good studio (Royaltone) with a good producer (Michael Bradford) making records in the old way, which is something I really understand. By the time I got into the band I been working mainly as a session man, that’s more what I was used to. So it was very refreshing to be back ‘in a band’. That album has a great feel. Paicey was really letting loose, trying to hold the band together… but Whoosh! is definitely the best album I’ve done with Purple”.

I saw you in Melbourne in 2013 I think, with Journey – I couldn’t believe then how together and how powerful the band sounded then, so, without wanting to descend into hyperbole, it’s amazing to hear how you appear to be reaching even greater levels of controlled power and tightness on this album. “Yes. A lot of that is down to Ezrin’s production. He’s got us a great sound. I remember that tour – it was great! We haven’t been back since”…

Talking of which – obviously you’ll have had some pretty solid touring in mind for this record. You probably won’t get out until next year. Do you feel under a bit of pressure now? Time’s is not the band’s friend at this point. Will you get out as soon as possible or are you happy just to wait until it’s absolutely safe for all concerned to head back out? “It’s funny. You do all the promtion for the album – interviews, all the hoopla. The album comes out… our record company are based in Hamburg in Germany, and they sent us a message to say that the album had debuted at number one over there, which is fantastic news. And then I thought ‘is this my last moment in the music industry?’ (laughs). Is that going to be it? Who can say what’s going to happen- it’s a very strange situation. We’re always playing, we’re always travelling… and you don’t know whether it’s going to happen again”.

Can you see the band maybe playing one of these ‘drive-in’ shows where everybody comes and sits in their cars to watch you? “Can you imagine it! Everyone tooting their horns in time – they’d even drown out Deep Purple! A drive-in gig? I don’t know whether that would work. They’ve just done a gig in England where the audience sat at little platforms, six to a platform. Maybe that would work. It’s going to be strange, with the limited attendances. It’s going to make a lot of hat bands do unviable. Which is a shame”.

And with that our time is up – Don, it’s been a pleasure. Thanks for the album and maybe, just maybe, we’ll get to see you and the band Down Under one more time at least. “I do hope so, It’s one of my favourite places to play”.

Whoosh! is out now.