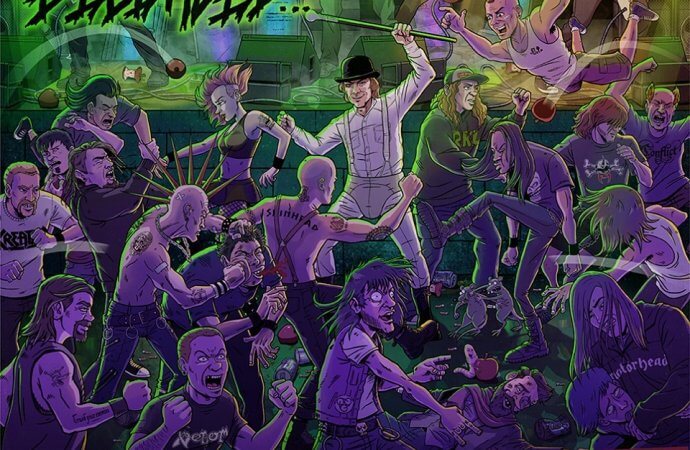 Deceased have a new covers album out next month...

American death metal institution Deceased, helmed, as ever by metal lifer King Fowley, first made an impression on my even-then shattered senses in 1997 with the still-worth-a-spin Fearless Undead Machines; In the intervening twenty-something years King has produced more metal than less ferrous beings could manage to create in four lifetimes, let alone a fraction of one, and next month he and his charges return with a second instalment of their cover versions collection, Rotten To The Core on Malt Soda Records. King was kind enough to take us track-by-track through Rotten To The Core 2…

Final Conflict – Apocalypse Now
“I remember cranking Final Conflict’s Ashes to Ashes record while me and pals went around stealing food and cruising after hours. One time we ran out of gas in the middle of the night at a gas station pump, stuck there with no money. We just cranked the music and ate stolen candy bars and chips and dip. Finally the guy came out and said “Leave”. We told him we couldn’t because we were out of gas and broke. He said “Pump $5 in and fuck off”.

Lethal Aggression – Spooge
“Lethal Aggression we discovered on the streets of New York at a VoiVod show in ’86. All of us were hanging out and we all talked of our mutual love for pcp. We got the From the Cunt of the Fucking Whore demo from them and loved it like a favourite grandmother”.

Kraut – All Twisted
“One of the first videos I ever saw on MTV back in 1982. It was raw and cheaply produced, but I loved the hook and attitude of the song. The chorus stuck with me forever!”

Outo – I Like Cola
“This song is most remembered growing up as falsely titled “I Like Killing”. Seems Dig (Pearson) from Earache Records as a youngster sent the song around as a fake band called Antichrist. the tune was so fast and savage that every tape trader had to have it amongst their Venom, Sodom, and NYC Mayhem tapes.

H.R. – It’ll Be Alright
“Bad Brains owned my soul in the mid-eighties and when I saw singer H.R had a solo record I grabbed it right up. The lead off track from it was a favourite, So catchy and so powerful!”

Discharge – Protest And Survive
“My first experience with Discharge was from stealing a tape case out of a car. They were dubbed cassettes full of stuff. One of the things recorded on one of them was the Never Again record. Heavy as fuck and punky. Instant love!”

Toxic Reasons – Mercenary
“Toxic Reasons came to me courtesy of one of many mix tapes that I obtained in my tape trading years. Mercenary always was the hit song from the band for me, so catchy, and a great one to sing along with”.

The Accüsed – Martha Splatterhead
“The Accüsed are one of my absolute favourite hardcore/crossover bands. They were going to be on Rotten to the Core first time around but for whatever reason it didn’t happen then. No fucking way were they going to be missing this time out! Blaine (Cook) is one of my all-time favourite screamers!”

Buzzcocks – Orgasm Addict
“Buzzcocks were always a cool and fun rock and roll punk band and one of the seventies first to do the zany punk rock attack. I had many dubs of them but never owned a vinyl. About three years ago my wife obtained a CD compilation at a flea market and I fell back in love with this tune as we drove around town jamming it on repeat”.

Stikky – Cheese Is Fantastic
“Some pals and I used to cover this tune in a side band in the late eighties called Undertaker. Stikky is one of the highest energy over the top bands in the history of music. So many good ones to choose from song wise but went with this as a shout out to the old side band Undertaker days”.

Crucifix – No Limbs
“A haunting tune from Crucifix. A band that used to be written on a lot of punk rocker jackets in Virginia when I was growing up. I got turned on to them by various pals in the area. Classic stuff!”

Die Kreuzen – Dirt and Decay
“The Die Kreuzen debut album is full of awkward arrangements, vocals, and guitar chords. The Dead Kennedys/Voivodish nuclear surf guitar chops always make me smile and this song is full of them”.

Impulse Manslaughter – Vomitheads
“The Impulse Manslaughter debut full record came to me from Rot Flesh, the artist that did Deceased’s Birth by Radiation artwork. He had done the art for the first pressing of He Who Laughs… album and passed one on to me. Loved the savageness of the band and Vomitheads was my track”.

Uniform Choice – Use Your Head
“I stole the seven inch from a shop in Georgetown growing up. Had to have anything fast and over the top but with very little money I had to break the law to feed my thirst. Fast and ferocious stuff, the only way to go!”

Broken Bones – Decapitated
“A punk pal and I used to jam this song repeatedly. We’d take bus trips to New York to see Slayer or Bad Brains and sing the chorus high on weed all the way there. The Dem Bones record especially got a lot of play over the years!”

Depression – They Wouldn’t
“A record trader sent me this from Australia around its release in 1985. I loved the raw and angry attack of the band. The horrid gory art cover just added to their intensity. So many good songs to choose from but this one jumped out at me when the time came for picking one”.

The Clash – London Calling
“I bought this record in 1980 at Zayre’s department store. I had fallen in love with a song called Train in Vain on the radio. I purchased their latest record but did not see the song on the album sleeve listing. Turns out the song was added after sleeve art was finished. I remember going to a pals house on the way home from Zayre’s and his sister, who was really into music, asking what record I bought. When I said it was a Clash record she went ‘ohhh that’s awful’. I knew I had a winner then. I loved the whole record but the title track turned out to be an all-time favourite song of mine”.

Cryptic Slaughter – M.A.D.
“Fast, fast, and fast. That’s what I needed musically in the mid-eighties and when Cryptic Slaughter surfaced I was all in. When Convicted hit the stores I bought it right up and played it at top volume repeatedly. From the first drum hits of lead off song M.A.D. they had a fanatic in me for life!”