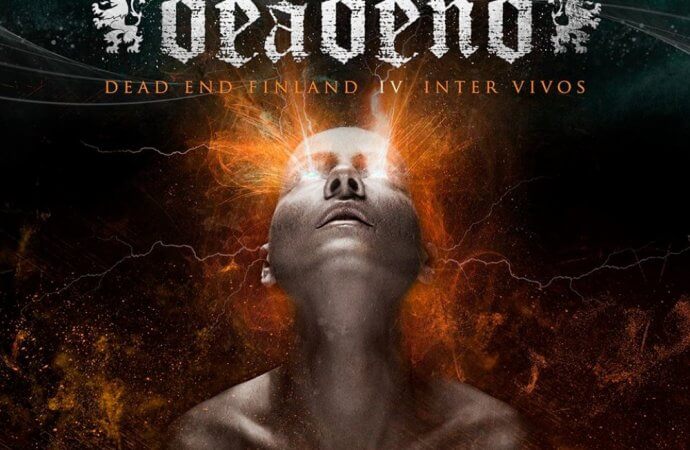 Dead End Finland, now four albums into a career that’s picking up momentum nicely (despite this being their first release since 2016), certainly know their way around a tune, and demonstrate throughout new elpee Inter Vivos their capacity to meld well-worn, some might say cliched death metal tropes into serviceable – actually pretty bloody good – pieces of tunesome heavy metal.

At times their musical backdrops, largely courtesy of keysman Jarno Hänninen, are so epic they threaten to flood everything they cross paths with; War Forevermore comes closest to pomp-fuelled catastrophe, yet still emerges on the other side unscathed and rather magnificent. Hänninen steers the band in the direction of any number of largely female-fronted symphonic acts with his contributions (Delain often pop into the mind, alongside Within Temptation and, of course, Nightwish), although at times fellow Finns Mors Principium Est also flash across the listener’s subconscious, whilst the clean vocals of the excellent Mikko Virtanen are never far away from Nick Holmes in Paradise Lost’s ‘wilderness’years; this is a surprisingly successful mix… throw in some crunchy (if a little airbrushed) riffage courtesy of Santtu Rosen and you end up with superb tracks like Closer To Extinction and album standout Tightrope, wherein all the various elements fit together in perfect synthesis to create 2020’s first bona fide must-hear track.

Heavier tracks like Born Hollow also offer much to enjoy even to the casual listener, and, if Dead End Finland are slowly shedding a large part of their original sonic disposition, what they lose in ferocity they easily make up for in songcraft and sheer style. They’ve chosen to enter busy waters by forging ahead into the melodic death metal arena, but when the opening, high-drama keyboard/guitar interplay of closing track In Memoriam crashes out of the speakers, it’s hard to come to any conclusion other than that the choice they made was the right one, because this is strong stuff indeed.

Inter Vivos is out on January 24th.