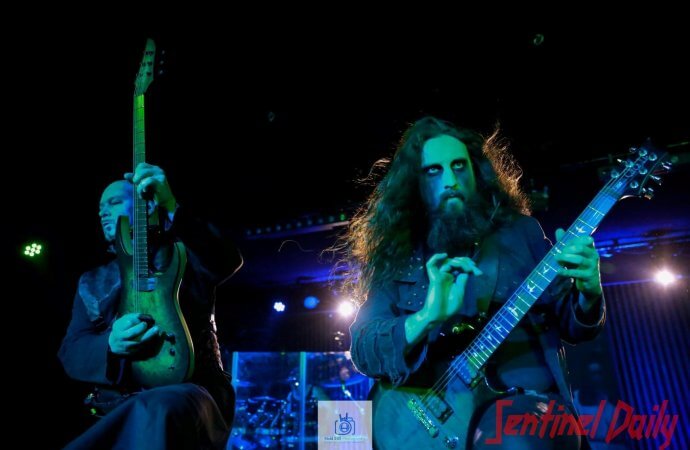 A classic brought to life on a drab Tuesday night in the suburbs...

When it emerged in 1998, Cradle of Filth‘s Cruelty and the Beast set new parameters for British black metal, parameters that some say even the band themselves have failed to build and expand upon since that time. I myself am not in that camp – there’s plenty more to enjoy in the band’s subsequent catalogue (I’m a Nymphetamine man myself, if truth be told), but it’s still a mouthwatering proposition to think that we humble Canberrans might be treated to an in-full airing of this classic album ON A TUESDAY NIGHT…

But first we need to get through the support act; Melbourne’s Hybrid Nightmares fulfil the role this evening, and do so in workmanlike fashion; they aren’t happy with their on-stage sound as they lay into their set but commendably get on with matters, rewarded with a warm reception from the already-healthy crowd. They’ll play better sets, for sure, but tonight they do enough to warm up the crowd in obviously trying circumstances.

The main event has no time for such fripperies; launching in to Once Upon Atrocity Cradle of Filth immediately underline just why they continue to stand at the head of British black metal in 2019. For this reviewer Dani Filth has assembled easily the best troupe around him that he’s ever enjoyed (tonight we see the same lineup as the band’s last visit to Canberra. I can’t remember seeing the same lineup twice in a row ‘back in the day’, and I saw the band a fair few times), and these men and woman cruise through the main part of tonight’s programme with a slick intensity that most bands of this ilk would kill for. That said, the feeling in the cheap seats is that there was a little more quicksilver quirkiness, a little more mercurial magic last time around; tonight the band do just what’s required, though keyboardist Lindsay Schoolcraft plays an obviously more prominent role tonight. The real sparks fly once Cruelty and the Beast has been dispensed with, the band delivering stinging and thoroughly exciting takes on Cryptoriana‘s Heartbreak and Seance and, in particular, Nymphetamine, to a fully appreciative crowd.

At this stage in the game Cradle of Filth let nobody down. This is a well-drilled machine, and, if tonight just lacked a little in spark that was more than made up for by sheer heavy metal grandeur. And sometimes that’s enough.