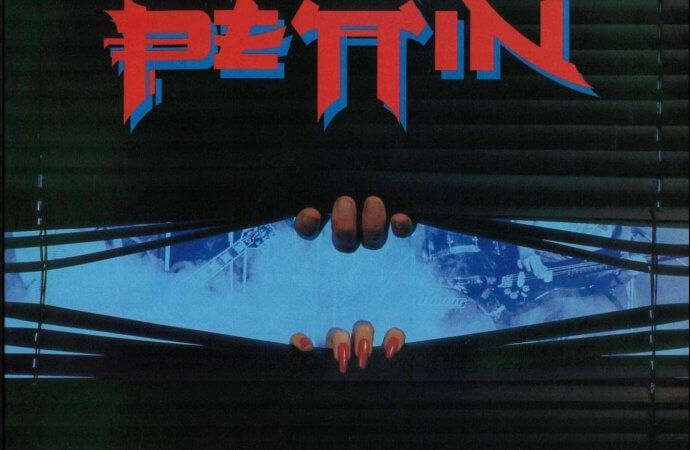 Join Sentinel Daily editor Scott Adams as he takes another trip through one of rock's classic albums, track-by-track...

One of the best, and most underrated releases of 1983 was Lettin’ Loose, the Brian May-produced debut album from Glasgow-based hard rockers Heavy Pettin. A superb mixture of muscle and melody, it should have made household names of the loveable Scottish larrikins, but, as we often see in our visits back to the past on Sentinel Daily, such success was not to be.

Still, the album remains one of the milestone releases of early eighties British hard rock, so of course we felt it should be featured in our Classics Track-by-Track series. And who better to talk to about it all than the band’s singing, guitar-playing drummer Gary Moat? Gary’s busy at the moment with his new band, Burnt Out Wreck, of whom more later, but was happy to chew the fat with me about days gone by…

What was the mood like in the band going into the Lettin’ Loose recording sessions? You’d already put out a single on the Neat label, hadn’t you? “Yes, Love Times Love with Roll the Dice on the b-side”.

And then you signed to Polydor, which was clearly a big thing. But whose idea was it to get Brian May in to do the record with you? “Well, we had quite a lot of interest from producers at the time, quite a lot of big names – Iron Maiden’s producer (Martin Birch – Ed) was one of them, but we felt he might have been a bit too raw. Then Brian May came onto the scene – obviously you couldn’t say no to Brian May (laughs)! It was just like ‘oh god! Yes! Thank you, we’ll go with Brian!’ Everybody loved Queen – everybody in the world loves Queen! But at the time it was like the biggest thing on the planet to happen to somebody just getting a record deal, you know? As if that (getting signed) wasn’t good enough then you get hit with Brian May walking into your rehearsal studio! We were overwhelmed!”

I can imagine! Let’s get on to the album – the first track was In and Out of Love. What do you remember about the recording of that? “Going into the recording of it with Brian May was mind blowing. We’d never done anything like that before. We’d only done some small demos, recorded in a studio that was like a little box… then off we go to the Townhouse Studios in London, which was massive, and we were just like five little boys from Glasgow! Recording that song was great… bangin’ out the drums… the advice Brian gave us about backing vocals – there are loads of backing vocals on the first album. But it wasn’t all his decision. That was just the type of song we were writing. And I’m still writing songs like that today. You’ve got to have backing vocals. Masses and masses of them! But Brian was a great influence and it was a lot of fun. In and Out of Love is a great track”.

It’s one of my faves for sure. The next track on the album is Broken Heart. “Broken Heart just started as a simple little acoustic idea. We were still working on it in the studio, and it took ages to finish it. It was unusual for us to have that kind of thing at the time so it took quite a while. But in the end it went down a storm and everybody loved it. I don’t think we ever played it live, but it’s a great song”.

I don’t remember seeing you play it live at any time. You say you worked the song up in the studio – did Brian offer you any guitar parts, or was he happy to sit back and let you work things out for yourselves? “Funnily enough Brian May never picked up a guitar the whole time he was with Heavy Pettin! He wouldn’t do it, he just wouldn’t! He just said ‘no, no, no – you’ve got two brilliant guitar players. I ain’t touching a guitar!’. So we left it at that!”

Track three was Love on the Run. “That was written by (guitarist) Punky (Mendoza). A great speedy, fast number, really uptempo, great to play live… just awesome! What else can I say? I just loved it!”

You always looked like you were having fun playing live. “We were five drunken Scotsmen (more laughter) what do you expect? We were full-on live, we were up for anything. We were only twenty three, twenty four, it’s what we lived for and we loved it”.

The next track is Love Times Love. “It was probably lucky that Love Times Love even made the album after coming out as a single on Neat, but it was felt that it was just such a good song and a strong song for Heavy Pettin that we said ‘we need to have this. It’s got to be there’. I was going out one night, waiting in the bus shelter outside my mum’s house on Cumbernauld Road, and all of a sudden the tune came to me. I tried to keep it in my head all night long when I was out getting steamin’ drunk, which was a feat in itself!”

But you can see why Neat wanted to release it, can’t you? It’s such an anthemic song, and at that time every band had to have what you would call a radio song, didn’t they? “Well, yes… obviously we did write quite commercial-type rock – everybody did in the eighties I think, but the record companies ruined many a band by trying to make them too commercial, and obviously they did it to us in the end, bringing in keyboards to try and get airplay, but Live Times Love was just straight ahead, two guitars, bass, drums… there you go!”

The next song was my favourite- I was a slave to this song when the album came out. Victims of the Night. “Victims of the Night? I don’t know where that came from. It’s just one of those songs. It builds and builds, it’s just great!”

The album had a great mix of styles, from Love Times Love, to Victims… which is much heavier. “Yes. Our influences as a band were everything in rock from the seventies! Victims of the Night is probably the Judas Priest side of us! It was too early in the day to say that it comes from Iron Maiden because when we were recording it they weren’t a big influence, and we were never into Sabbath because we were too young. We were into Thin Lizzy, who came after the Black Sabbaths and Led Zeppelins of the world”.

Next track opened up side two of the original vinyl release, Rock Me. “That became quite a big song for loads of fans… it was quite a big stadium kind of track and went down well in America when we went over there with Mötley Crüe. The whole recording of it is a bit of a blur, it was too long ago and there’s been too much beer drunk since then! It didn’t take long to get the track down”.

You said that songs came to you in places like bus stops – was that how it came together. Did members bring songs into rehearsals individually or did you write more together to see what came out? “Before we were Heavy Pettin we were called Weeper, and we played half covers and half our own songs, As we got into our late teens we decided we should get serious, and we got Hamie in to sing, a couple of members left, Punky came in on guitar, and we all started to get into songwriting. Songs just come to you anywhere and everywhere. When you’re younger you listen to so much music, and many influences are there”.

Next track was Shout It Out. “We went down to Gordon (Bonnar, guitars)’s sister’s house in Manchester to do some decorating; we were painting it bright gloss white and Gordon started screaming at me ‘Shout it out! Shout it out!’ and mouthing the guitar riffs, and I was saying ‘yeah! That’s awesome mate!’. After a few beers later on I sat down with my guitar and that’s how that one came about. Another crazy story!”

Next up is Devil in Her Eyes. “That’s more of an AC/DC-influenced one, although it doesn’t really sound like them. I loved recording that one. It’s so atmospheric at the beginning, with the crashes… it’s the only track on the album that Brian May is actually on. He’s on the high backing vocals with me. He was comparing me to Roger Taylor, because that’s what he did in Queen! There were so many layered backing vocals on that song. Brian went to town!”

The last track is Hell is Beautiful. “Well, hell is beautiful, you know? When you’re down the front at a gig, your hair’s flying around, the noise, the audience is going mental, everybody’s headbanging… that’s your hell is beautiful. It’s nothing to do with Hell! It’s all about rock n’roll! Just brilliant. Fast – it got faster and faster and faster as time went on until I couldn’t play it any more! I couldn’t keep up!”

So that’s the album wrapped up. When the recording was finished you must have been on top of the world? “It took a lot of time to get it finished. We started off in London and ended up in Munich, in Germany. It seemed to take for ever to get it out and about, but it was really exciting. And then within a couple of months we were out with Ozzy Osbourne on the Bark at the Moon tour, and Kiss on the Lick it Up tour, and that blew our minds! We were chucked straight into it, and off we went! It was an awesome time. You just couldn’t do that anymore!”

You certainly couldn’t! But you are still rocking – tell us what’s going on in the world of Burnt Out Wreck for 2017 and 2018. “Well, yes, the album came out earlier in the year and has really been well received all around the world. We haven’t had any negative feedback in at all at this point, which is really surprising! (laughs). We’ve only done a handful of gigs, but we’ve been well received live. We played two brilliant nights with Y&T, we’ve supported LA Guns in London, then this month we play Hard Rock Hell in Wales, which we’re really looking forward to. Then we’ve got a couple of shows and it’ll all be over for the year. Unless our manager slots a few more in!” 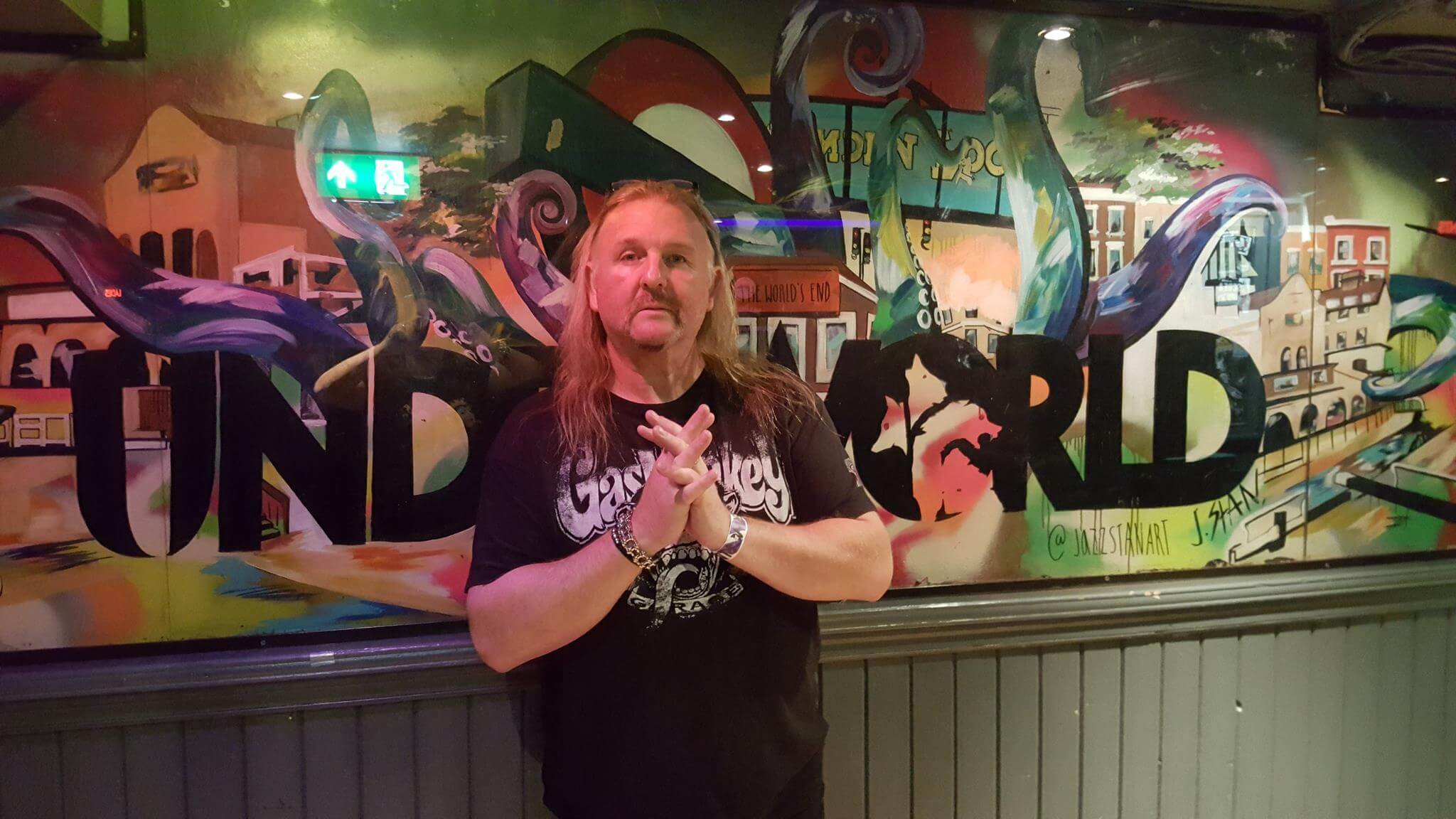