Burnt Out Wreck’s Gary Moat: “The Reaction To The New Album Has Been Amazing”… 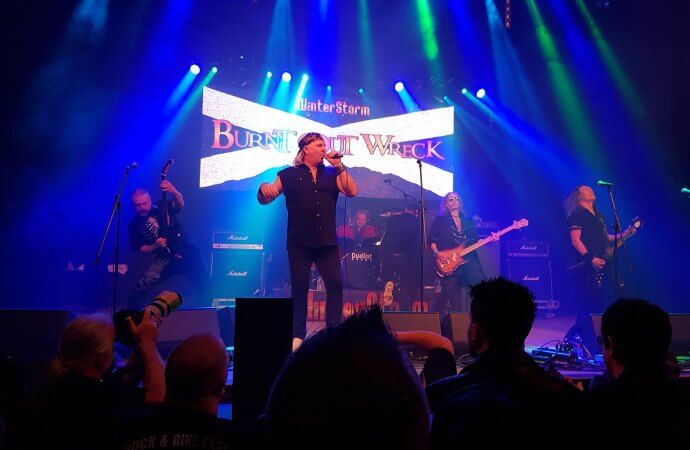 Things appear to be on the up and up for one of Sentinel Daily's fave hard rock acts...

Brit classic rockers Burnt Out Wreck returned this year with a second album- I refuse to get involved with words like ‘sophomore’ – entitled This Is Hell and out on their own Burnt Out Wreckords imprint. It’s a compact but bijou stormer of an album, and one which I remember saying in my review at the time of release as being one you need to own.

That’s still the case of course – if you haven’t got it yet I suggest you remedy that sorry situation as soon as possible – and so the chance of a chat about This is Hell with band mainman Gary Moat wasn’t one to be sniffily passed up in favour of a record company-controlled chat with whatever flavour-of-the-month act it is that they’re currently peddling… We are Sentinel Daily and we are only interested in living, breathing heavy rock n’roll after all. It’s a brisk Autumn morning where he is and, somewhat sadly, an even brisker Summer evening where I am so there’s nothing for it but to try and warm ourselves up with a bit of rock-based cut n’thrust… the tape is rolling!

The album has been out for a couple of months now. Are you pleased with reaction to it thus far? “It’s been immense. Far greater than I thought it was going to be and far greater than the first album to be honest”.

You played at the  Winterstorm Festival in the UK this past weekend – are you going to be able to get out in support of the record? Are there tours planned? “We don’t have any tours as such. Winterstorm was the last gig for us in 2019, but we start again for 202o in January at the Skegness Rock and Blues Festival at Butlin’s. A lot of people go to that – it’s a weekender type of thing. We’re lucky enough to be on the main stage at that one. We played there this year on the ‘Introducing’ stage and we got voted ‘best band of the evening’ in a competition to see who the fans wanted back in 2020. The crowd was enormous last year so we’re looking forward to that”.

January in Skegness. Take your thermals. “Yeah, I know it sounds crazy… what has my life become? (laughs)”

They’ve become big business haven’t they, those holiday camp rock weekends. “Yes – you have to see it to believe it! Thousands of people, and they all love it. They all go and see every band – I guess they’ve paid for it so they would! – but it’s really, really great”.

Going back to the album, there have been a lot of AC/DC comparisons again, not least from me. At what point do you think does that become deleterious to the band? You don’t want just to be known as an Airbourne-style knock-off, surely? “I was talking to (iconic Scottish rock DJ) Tom Russell about this; he said he remarked to Joel from Airbourne once that they sounded like AC/DC and Joel replied ‘do you think so? to me we just sound like Australian rock’. I found that quite a funny comment, but I suppose that a lot of bands in Australia do sound a bit like that, because it’s what they do. So I don’t know why I get hit with it, because I’m from over here, but I see what you’re saying. On the first album we had a mix of styles – it’s not all like AC.DC – but people pick up on it because my voice sounds like Bon Scott. I don’t understand why – I’m not trying to be Bon Scott, I just sing in a high register. But on this album I did go for that style more than the other styles I write in because everybody enjoyed my writing in that style on the first album… so I thought well I’ll just go that way then! Do it and see what happens. And so far everybosy has liked it, people are saying we’ve stepped up a gear – which is great. If they are enjoying it then that’s why I’ve done it! What can I say?”

As David Lee Roth once said – give the people what they want, then give it to them again! “Yes. At Winterstorm we went on at quarter past one in the afternoon, we were the second band on. But the hall filled up. The was a U-shaped balcony all round the venue that was packed. It was mental. We had our socks knocked off! We didn’t expect the reception we got. People were laughing, dancing, singing… I’ve never seen the band so happy after a gig! People were talking to them after the show which never happens – it had to be Scotland that got behind us! We’ve played everywhere over the last couple of years but we’ve kept it low profile this year because the album was coming out, but that was a great way to end the year. We’re still on a high!”

You say you’ve been everywhere but you haven’t yet made it down to Australia – however I did hear a little whisper you might be coming Down Under next year? “Hopefully. There was talk we might be able to come down as part of a package with the Pete Way Band and the Tygers of Pan Tang in April or May – but it’s really Pete’s thing so we’ll have to wait and see. I believe talks are still taking place”.

You played with Pete’s Band in the UK earlier this year. How did it go? “It was good. Pete doesn’t play bass any more, he just gets up and sings what he fancies! he doesn’t wan’t to give up!”

It’s a shame he hasn’t been able to take part in the final UFO World Tour in some capacity. “I guess so, I don’t know… Heavy Pettin are touring and I’m not a part of it!”

Ah yes, your former band. You’ve been active on that front too with the re-release of the three Heavy Pettin albums on Burnt Out Wreckords last month. What was the thinking behind that?

“Basically Claire (Moat, Gary’s wife and Burnt Out Wreck’s Manager) started Burnt Out Wreckords, which our new album is on. She’s been negotiating for, well, for ever I’d say, to get the licenses back for the first three Heavy Pettin albums. When we split up in 1989 they were basically given away by the record company; none of the albums never made anything back. It’s just one of those things. And not just for Heavy Pettin. Many people’s back catalogues went AWOL. And it’s such a weird thing that it isn’t policed! So anyway we managed to get the license for the first three albums for physical distribution – Universal Records still own the download side of things – but we can at least now see that the albums are in safe hands. What it means to me is that we can now start paying back the debts that we still owe for the making of the records. Nobody ever paid it back at the time because they were too busy living the life of Reilly, you know? (laughs). But if you think about it there are thirty years of album sales – thousands of albums – that we never got anything back on. People were making box sets – selling for two hundred pounds! and people were buying them (more laughter) – which were effectively bootlegs, but nobody at the label was interested because they were too busy with the new acts they were signing. But we’ve had a lot of offers around the World which we’re shipping out soon”.

It’s good too that the third album, The Big Bang, will get a bit of a new lease of life too. It tends to be a bit of a forgotten album. “The Big Bang was an immense album. It was one of the darkest periods of my life making that album. There was so much pressure. There aren’t too many happy memories I’ll tell you that. All sorts of shit happened to us in that period. The introduction of keyboards – one of the guys who produced the album (Adrian Lee) was Mike And The Mechanics keyboard player and obviously he loved keyboards! But you would come into the studio and hear a bit of guitar and say to the guitarists ‘I love that guitar part did you do that last night?’ they’d say ‘no.’. It was Adrian Lee! He git in Mike And The Nechanics’ Drummer to play on the record because I wasn’t hitting the cymbals right. I was just like ‘fuck off! this is how I play it!’ you’ve never seen scenes like it in the studio! But some of the songs were really great. But (label) Polydor had had enough and dropped us after the album was made. They gave the album to FM-Revolver Records who fucked everything up. They took the best song off the album, which was Rock Me Endlessly, and put Madonna On The Radio on it, which wasn’t even a Heavy Pettin Song!”

It’s hard to believe now, thirty years later, that the album disappeared. “If Polydor had have got behind it and we could have toured in America it would have been huge – it was right for the time”.

This Is Hell is out now through Burnt Out Wreckords.
All three Heavy Pettin albums are also available through the label.