Burnt Out Wreck’s Gary Moat: “Lots of things are happening for the band at the moment”… 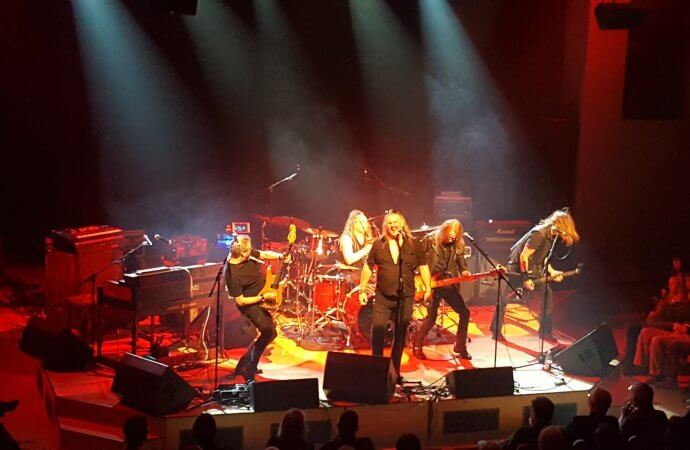 Scott Adams spent a lot of his time in London recently in Pubs talking to musicians... here he catches up with former Heavy Pettin drummer/current Burnt Out Wreck frontman Gary Moat for a chat about hard rock in all it's glory...

Thanks for coming and having a talk Gary – it’s a real pleasure to talk to you. I’d like to have a chat about what the future holds for Burnt Out Wreck but first let’s go back a bit and talk about the band’s self titled debut…

So when you came to make the decision to go ahead with Burnt Out Wreck, what did you have in your locker, song wise? Did you have a nice selection stored away or did you start afresh? “Six of the songs were older, songs I’d written over a period of time, and I did five new ones, because I wanted to bring things up to date with material I hadn’t heard myself… but quite a lot of the riffs were in storage as it were because I just write, even if I don’t come up with anything. Swallow and Flames were two of the newer ones which was a good thing because when we play them live everyone goes bonkers!”

But as a listener it’s impossible to tell what was written when – it’s a very cohesive record. “Well I suppose that’s because it was just me that wrote it. As soon as I open my mouth that’s what it sounds like! But it’s not all the same thing… some of it sounds like AC/DC but to me the song Burnt Out Wreck has a Scorpions-type sound… someone said to me the other day ‘you remind me of The Almighty’ – I said ‘get out of here’… at what point am I sounding like Ricky Warwick?”

Did much material get rejected? “Not really, because when I get something I like I will carry on and work on it… I had a short period of time to get the album done and I didn’t have time to be trawling through ideas.”

Do you sit down in a regimented fashion to write or are you happy just to wait for the ideas to come out? “Well, in the past they’ve just come out. I’ve got a recorder by the side of the bed where most people have a clock! I’ve always been like that. I used to sit up in the middle of the night trying to get something down that I’d dreamed… I scared the wife witless! I’d be there with a guitar and she’d be going ‘for fuck’s sake man, go back to sleep!’. But if it turns out to be a great song, you have to get it! But the way I do things these days is that I sit down, try and come up with a riff and then try to find a melody to go over the top of it. I try to get the verse-bridge-chorus, and then I shelve it. But that’s been my trouble in the past because I didn’t have to finish songs!”

So it’s been about eighteen months now since the ball started rolling, you’ve been living with this album for all of that time – is album number two in the pipeline? “Second album? We’re still doing the first one!”

I guess as momentum picks up you have to go with it? “We’ve got gigs coming up all the way to the end of the year. And we’re already booking for next year. Lots of things are happening for the band at the moment. We were picked up by Mexican satellite TV, They’ve picked up Flames which is going really well over there. Then we’ve got Hard Rock Hell AOR early next year… we played the second stage there last year and we’re on the main stage next time. So there’s a lot going on. But hopefully we’ll find the time to get stuff recorded. I’ve already got the songs – not complete! But they are good ideas and they’re there”.

You mainly recorded the first album yourself apart from the guitar solos – will you do the same this time? “This time I want to get the band in. It’ll be good. I’ll still tell them what to do, mind!”

I’m guessing there won’t be much difference, style-wise with the new songs? “I don’t want to change much. I was really unsure when the first album came out, I didn’t know how people would react to it., whether the AC/DC influences would be a bit too much”.

But that music is timeless. “It is – it’s the best thing! Doesn’t matter where you go, everyone loves it. We played a gig last week in Oxfordshire. All the other bands were teenagers, really young – it was one band’s first gig. All the way through our set there was this young girl, stood staring. Afterwards she came across to me and said ‘I really love that – old style rock. It’s brilliant that you came here and played this because usually all we get is young bands playing whatever it is they’re trying to do’. Her parents were in to AC/DC! So although I was worried about the AC/DC slant, the amount of good press we’ve gotten because of it… some people have said it might be a bit near the knuckle but it’s not like we got hold of Back in Black and did it backwards”.

My band did Whitesnake’s Still of the Night backwards. “Did you?(laughs)”

So you’re mainly basing operations in the UK at the moment? Any plans for Europe? “ I think we’re doing one of those Cruises in the new year, one of the Scandinavian ones… And we’re hoping that maybe this exposure in Mexico might lead to some shows there. There’s been talk of a festival there, and maybe a couple of shows in Texas too”.

Is that The Hell & Heaven Festival? “I’m not sure”.

If it is it would be one of the biggest thing’s you’ve done. “It would top supporting Kiss at Wembley”.

Did you do many festivals with Heavy Pettin? “Not many. I remember doing one in Paris with Ozzy, Gary Moore and Dio. Like Monsters of Rock but over there. We were up there playing in front of thousands of people and the next minute some bastard is tugging my bass drum peddle away. It was Lars Ulrich. I didn’t know who the fuck he was!”

I seem to remember you playing a festival with Giuliano Gizzi from Gun on guitar? Where was that? “I think it was the Lorelei. Punky (Mendoza, guitars) was in hospital having his tonsils out and we couldn’t turn donn the gig, there were thousands there. This was before Gun had formed. Giuliano was just a mate from Glasgow, he loved doing it!”

Was that with Marillion? “No, I don’t think so. Venom maybe? With Cronos. The tea boy! He was the tea boy at Neat Records when we recorded our first single! Then all of a sudden he’s this big demonic bloke!”

Happy memories… but luckily the future is looking just as rosy for Gary Moat. If you haven’t already sampled Burnt Out Wreck, I suggest you do so now – you won’t regret it.