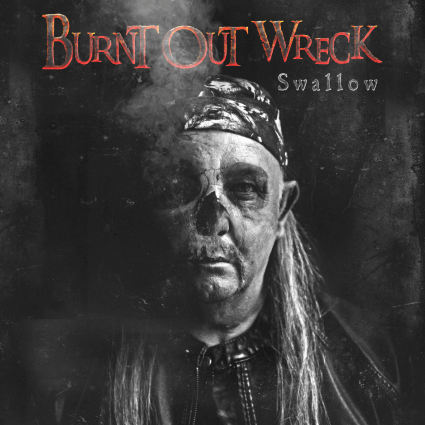 It may be a hard fact for you to swallow, but old rockers really do do it better...

If you’ve been a fan of heavy rock for as long as I have – and that’s quite a tidy sum of years now – then you might well recall the name Gary Moat: Gary, y’see, has now turned up as leading light behind British retro-rockers Burnt Out Wreck.

That’s right! He was the drummer in Scottish melodic metallers Heavy Pettin back in the day, a rock-solid tub thumper an’ no mistake; however if you’re expecting him to fulfil the same role in BOW, then think again, because it turns out that Mr Moat is a multi-talented so-and-so, singing the songs, writing the songs and playing some of the guitar on his band’s debut offering, Swallow.

And what an offering it is! There’s no point, erm, beating around the bush – almost every song here sounds like prime-time Highway to Hell-era AC/DC, but everything is done with such fire, joie de vivre and downright fun that the album as a whole is just impossible to resist.

They’ve got everything the Youngs and Bon Scott had and more, right down to ‘suggestive’ lyrics – try Pulling it Out for size, missus, ooh! – and barnstorming, chorus-laden, radio-bothering hit single material by the barrel load. Flames could easily have been on AC/DC’s last decent album, Flick of the Switch – it’s a bit of a deadringer for Bedlam in Belgium if I’m being honest – whilst lead single – wait for it, it’s called… Swallow… is an utterly titanic slice of the sort of rock you might have thought got swept away in the grunge floods of the early nineties. I’ve got news for you – it didn’t, and its alive and well and roaming the English countryside…

Medusa is a stone cold classic piece of hard rock, riding in on some superb guitar from Adrian Dunn and benefitting from a spirited vocal from Moat, who really is a revelation throughout – but to go back to that honesty thing again I have to say there’s nothing really to fault throughout Swallow; If I’m not enthusing about Medusa I could just as well be eulogising the superb leadoff track Burnt Out Wreck – there really are no dull moments here.
So on with the eulogy: Burnt Out Wreck is a magnificent song – the best on the album, to my increasingly decrepit mind –  and that might be because it is perhaps the one track on the album that sounds a little bit like Heavy Pettin. Fiercely melodic, yet with a maelstrom of riffs that more metal-obsessed fans will find themselves in complete accordance with, it’s already cemented itself as one of my fave songs of the year and will be one of your too if you give the album a spin, which of course I think you should.

Elsewhere She’s a Dirty Love is a stomping, good time, sleazy rocker – just how you like it, eh? – whilst Your Love (Is All I Need) starts off all ballady and disappointing before erupting into a Bad Company-style stomper that’ll have em’ up and swaying in the aisles when the band gets going on the live circuit. Lighters – ho!

The final brace of tracks Rocking Man and Best of Your Life finish the album as it started – in heads-down, balls-out fashion – and the final verdict is an easy one to arrive at: If you love hard rock as it used to be played, with well-written tunes and top-drawer playing and production then you’ll quite probably not hear better than Swallow for some little while to come. Get involved!

Swallow is released on February 10th, and UK readers can see the band in action at the Giants of Rock Festival in Minehead on January 28th.