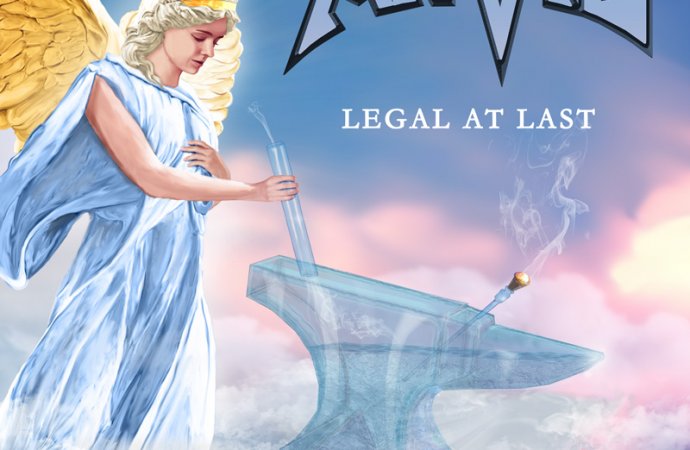 Like much of Canadian veterans Anvil’s work, there’s an awful lot of forgettable material on their new album Legal At Last; hamfisted lyrical missteps abound, as ever… but, amongst the not inconsiderable amounts of fluff lurk some of the finest songs this band has committed to tape since their halcyon early eighties heyday!

Which makes this by some way the best album the band has put out since their cinematically kick-started renaissance back in 2008. When things click here, they really kick, with Steve ‘Lips’ Kudrow flying up and down the fretboard, unleashing some of his best riffs and solos in aeons, and old sparring partner Robb Reiner sounding absolutely rejuvenated behind the kit.

The centrepiece of the album is a run of three absolutely killer tracks, I’m Alive, Talking To The Wall and Glass House that are frankly mind blowing in their brilliance. I’m Alive is a straightahead gonzoid rocker so old school it’s still practising capital punishment – straight outta The Rods‘ playbook actually – built on a superb riff and some fleet-fingered soloing from our hero, whilst Talking To The Wall is one of those hapless outsider anthems that Kudrow has become something of an expert in down the years. He knows he can’t do anything to change things, but that won’t stop him penning a corking bit of agit-metal anyway. A lurching, angular celebration of the relationship between the riff and the kit, Reiner and Kudrow both deliver faultless performances to hammer home the point. It’s heads down, it’s no-nonsense… it might even be mindless – but it’s bloody brilliant all the same. And the niftily inserted gang vocals at the end of the song mean it’ll be a monster live crowd participation track, too…

The third leg of the trifecta is Glass House, perhaps the least ‘Anvilesque’ song on the album. Built on a pulsing bassline from the oft-unsung Chris Robertson, the track builds into another storming singalongalips anthem that displays a grasp of dynamics not often evident on Anvil songs. Less is sometimes more, even in this world, and the way the band build up the intensity, climaxing in anther superb solo, is a joy to behold.

The doomy Gasoline is also pretty gargantuan, as is penultimate track Food For The Vulture, with the result being easily the most enjoyable Anvil release in a long while. The band must take a great deal of the credit for this, but the superb production of Martin ‘Mattes’ Pfeiffer & Jörg Uken also deserves a mention in dispatches. So, accentuate the positive, eliminate the negative – and you’ve got yourself the first surprise success of 2020. Nice work!

Legal at Last is released on February 14th. The ideal gift for the Valentine in your life!