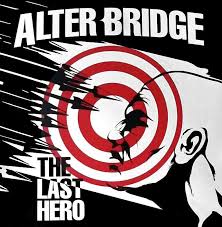 Myles Kennedy is holding out for a hero...

I was first introduced to Alter Bridge through my regular watching of the” violent soap opera for boys” that is the WWE.  Alter Bridge provided the theme song Metalingus for one of my favourite wrestlers, Edge.  So once I found out who they were, I got myself a copy of the album One Day Remains and then Blackbird when it was released which really got me into the band.  I was then able to experience the band live supporting Disturbed, on the Indestructible tour many years ago in Newcastle (the Australian one).  I saw the energy and gravitas that they brought to their work and was fast becoming a fan of everything they had to offer.

But what they teased at in that little taste in Newcastle was confirmed when I attended a House of Blues, Las Vegas headline gig with my mate Choppy.  I was able to see what they could do when they had an audience at their mercy for a full two hours, I even managed to snare the drumstick from that gig and it sits in prime position in my spare room (think of The Pool Room in The Castle).  Wow, what an awesome night.  So when I knew that the guys had a new album coming out I asked for a chance to review it.

The Last Hero, the fifth album from Messrs Kennedy, Tremonti, Marshall and Phillips, is Alter Bridge through and through from start to finish.  Alter Bridge rides the edge between hard rock and metal.  The band is blessed with a driving rhythm section overlayed with great licks and riffs, intricate solos and amazing vocals from one of the best in the business, Myles Kennedy.  After taking time off since touring to support their last album Fortress, to undertake their other projects; Myles Kennedy with Slash and Mark Tremonti with his own band, all the guys were very keen to get back together and start working on new material for the album and it shows.

A hero based theme is running through the tracks lyrically and the album is so titled.  The album opener Show Me A Leader kicks off with an intro that really doesn’t hint at the power and the urgency that is about to follow with its sonic assault and Myles’ voice in fine form, at times almost pleading the chorus “Show me a leader that won’t compromise, Show me a leader so hope never dies, We need a hero this time…” This is a song, which to me, really is a comment on the state of the world today.  Mark Tremonti has taken up a seven string for the first time in this song and shreds it effortlessly.  This sets the album up nicely.

Following on and not letting up is a duo of tracks that have a grooving beat that are getting my feet tapping along.  They are classic Alter Bridge in sound and are yet showing subtle changes to that normal sound at the same time with a deeper alternative tuning.  By the time you are through the opening trio and are warmed up suitably you get another single off the album that most fans will have heard by now, My Champion.  Myles wrote this song about all the people that supported him in his younger years as a small underdeveloped kid that had to work extremely hard to keep up with his peers. Lyrically this song is really uplifting, so much so that I feel like I am literally being lifted up to the sky.

Throughout the album there is a mix of up tempo tracks and only a couple of slower tracks such as Cradle to the Grave.  All songs are very strong both lyrically and sonically, being driven by the very tight, unheralded rhythm section of Brian Marshall (bass) and Scott Phillips (drums).  Like most of the Alter Bridge albums over the years I find that the songs grow on me after a few listens and then I start picking up the nuances abounding within the songs both lyrically and in the playing of Myles and Mark.  These guys really feed of each other and if you get to see them live you can watch it in their playing together on stage.

But it seems like all the songs have been building up to the albums finale, the title track, and it is well worth the wait.  This amazing piece, that is almost 7 minutes of pure listening pleasure, weaves its way from instrumental magnificence and tempo changes to heavy driving riffs.  The epic nature of the song is reminiscent of the magical track that is Blackbird from that same named album.  As the track ends abruptly I find myself putting it on for just one more listen…

Overall I found that there is plenty of interest in this latest offering from the guys in Alter Bridge, and I for one am looking forward to getting to sample some of these new tracks live when they tour next.

The Last Hero is due out on 7 October through Napalm Records.  Check it out!

Best tracks for me are Show Me A Leader, Poison In Your Veins, My Champion, Losing Patience and The Last Hero.