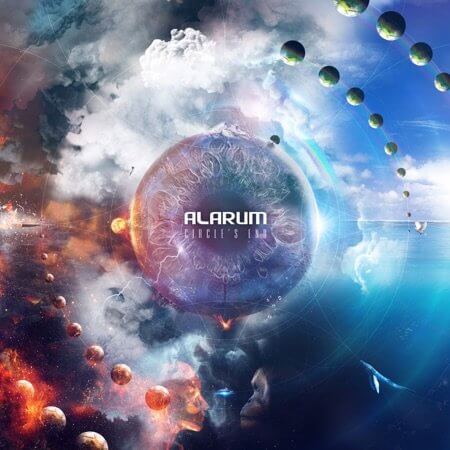 Jazz metal. It’s a term which should send black arrows of fear straight to the hearts of all those who hate false metal, if you’ll permit me a rather clumsy paraphrase. And yet Melbourne’s Alarum manage to make this vile hybrid their own over the course of the ten tracks that constitute Circle’s End, in the course delivering one of the most pleasurable listening experiences I’ve had thus far in 2020.

The track Sand is most probably where Alarum display their wares most concisely and where they make the best case for their chosen style. Veering effortlessly from cocktail lounge chords through angry crossover to Devinesque, spacey prog in the course of five minutes and thirty nine seconds, nothing sounds forced as the band flow freely from seemingly disparate movement to movement; Never once do you feel ‘difficult’ chords or riffs have been shoe horned in just to prove the band’s credentials, with the result being ‘merely’ a supreme exposition of compositional brilliance.

The opening pair of tracks, Sphere of Influence and Szyzgy roam through similar landscapes, with dissonant chords from the Andy Summers playbook butting heads with djenty lead runs and straight up death metal bellowing; you are never sure where the band are heading next, but that’s never a problem as you know wherever you do end up the results will be mighty satisfying.

War of Nerves cracks heads initially like a death metal King Crimson, before commencing a slow dissolve into the world of Earl Klugh – let me assure you that’s not as catastrophic as it looks on screen – before In Spiral perhaps restores some sense of what you’d expect as normality thanks to the battering drum attack of Ben Hocking and the chunky riffage of Scott Young and John Sanders. This is perhaps the most straightforward sound you’ll hear from Alarum on Circle’s End.

But if Sand is where the band define themselves best, the album’s title track finds them at their most draw-droppingly impressive; this really is kitchen sink metal, quoting everyone from Van Halen to Death to Coroner to, well – you name it. The lead run at the end of the track is worth the price of admission on it’s own, and that’s before we address the Nick Menza-style battery of Hocking or the ever-present black hearted pulse of bassist Mark Palfreyman.

Closing track Sojourn sees the band rounding things out with a track that’s a neat summation of everything that’s gone before, starting tentatively before exploding into another single-song progfest that once again manages to inject skewed melody into places no melody should be able to survive unaided, with all members of the band once again digging deep. Can four players get man of the match awards at the same time? They can now.

I’d never heard a note of Alarum’s music to the best of my knowledge until the boss man suggested I give this a go, as anything containing even the merest hint of jazz usually gets me frothing at the mouth with indignation. I guess you could say I’m a convert, but more important is the fact of this particular matter is that this is simply one of the best albums I’ve heard in a long time in any style of music. Impressive stuff.