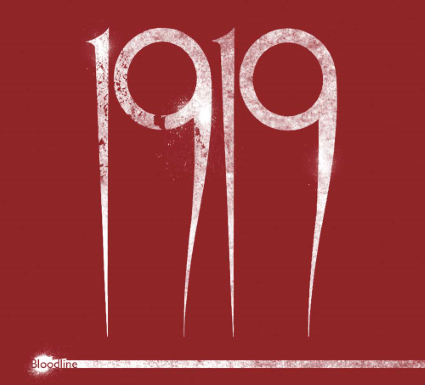 Proto goth/post punkers 1919 have, remarkably, been extant for four decades, though I wouldn’t be surprised if you looked at me blankly and said ‘who they?’ in a quizzical fashion on first hearing of the name.

You must act quickly to rectify that situation, however, for in Bloodline this band have released an absolute pearler of a record. Like a stupefyingly perfect mix of names like PIL, Gary Numan, the Human League and the Psychedelic Furs – all the early incarnations of those acts, natch – Bloodline is as close to ‘easy listening’ as this kind of music ever gets, but in a very, very good way. A very good way indeed.

The cunningly-named Retrograde carries a strong whiff of The Cult and Siouxsie and the Banshees about it, it’s bass-driven groove literally demanding you get out of your seat and bust some Astburyesque moves in sympathy. Records this evocative of a time or place are usually constructed to be so, and hence always feel a little forced. Bloodline absolutely bleeds authenticity, however; The band were at the centre of the Yorkshire goth explosion in the early eighties, and this record sounds like it was recorded at The Slaughterhouse by Colin Richardson around that time. Perhaps the key to all this, Mark Tighe’s spirallingly jangly guitar assault aside, are the oh-so-British, oh-so-trenchcoated vocals of the superb Rio Goldhammer. Equal parts Oakey, Butler, Lydon and Murphy, the man really is the eighties incarnate, which in the argot of Sentinel Daily is clearly the very highest praise it’s possible to give.

Karl Donner doesn’t let the bass be shrouded by all this miserablist grandstanding; His excellent roving work on opening track Bloodline is upfront and punchy, whilst Mick Reed has all the right (ie era-authentic) drum patterns at his fingertips. If modern bands like the artists formerly known as Beastmilk get you hot under the collar, this album is going to drive your pleasure receptors off the scale. Put simply, If hypnotically melodic, urgent rock, sincere music moves you in any way, then Bloodline will excite and delight you in every way possible.